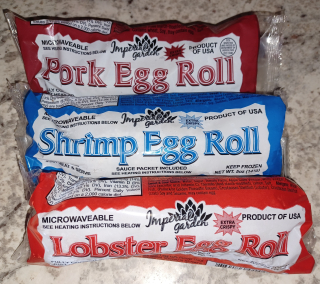 Good egg rolls are crunchy on the outside, then you get the seasoned meat or seafood and tender-crisp vegetables on the inside.  It's Chinese cuisine satisfaction and fried food delight all wrapped up in a single, wonderful, finger food bite.

So on a whim while shopping at Dollar Tree the other day, I grabbed some egg rolls to try. 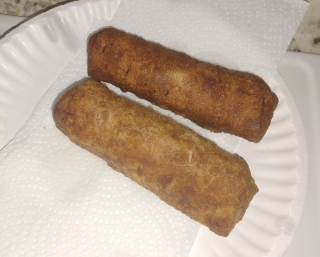 Egg rolls warmed up and ready to eat

I shop regularly at Dollar Tree, but my shopping list for the store typically consists of household cleaning products, paper towels, paper plates, trash bags, parchment paper and the like.  I don't normally buy food there, with exception to the occasional bag of nuts, chips or popcorn.  But when passing by their frozen foods section on my way to the cleaning products aisle, the egg rolls caught my eye.

A good sized egg roll and priced at $1.25 each, I figured these would make do for an impromptu lunch and it's the lobster egg roll that intrigued me the most. 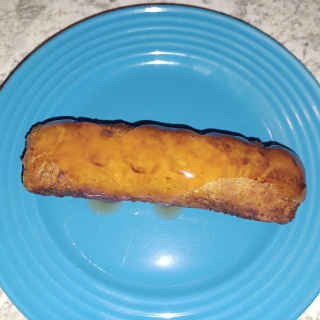 After shopping and putting away my cleaning product purchases, I preheated the oven. Package instructions recommend baking the egg rolls in the oven or microwaving.  In past experience with other brands, microwaving doesn't cut it.  You get a chewy exterior, rather than crispy.  Just putting them in the oven isn't perfect either, it's a better preparation method that microwaving, but the oven still doesn't give you that just out of the fryer and nicely crispy/crunchy exterior like you get at a Chinese restaurant.  So I do a bit of a cheat.  In addition to preheating the oven, I fire up a frying pan and a shallow bit of canola oil.  I "par-fry" the egg rolls if you will, which are already fried and also quite thick.  Pan frying for about a minute on each side (any longer and they'll burn and the inside will still be half frozen) then putting them in the oven to heat them through gives you that crispy/crunch exterior. 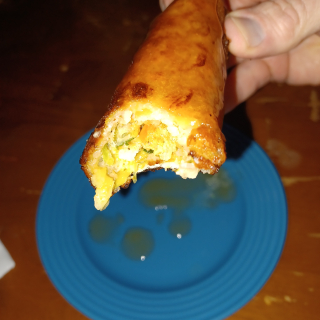 After par-frying and completing in the oven, I sampled the lobster egg roll first.  It had the nice crispy exterior crunch I was looking for.  The veggies, predominantly cabbage, were tender-crisp but the lobster... the ingredient that caught my eye and provided the motivation for an egg roll lunch was almost non-existent.  The lobster was minced very small and sparse.  Yes, lobster is actually listed as an ingredient (I checked before buying because I suspected that imitation crab meat stuff, which is fine, but it did in fact list lobster), but it's not lobster in chunks.  It's mixed with the imitation stuff (farther down the ingredient list) and crab and lobster 'flavoring.'  This wasn't surprising, but the mince and the lack of it was disappointing.  This egg roll is for the most part, cabbage and lobster 'flavoring.'

I tried the shrimp egg roll next.  It was pretty much like the lobster egg roll, in fact, I really couldn't taste the difference between the two.  Thanks to my par-fry cheat, I got a nice crispy, crunchy exterior, the cabbage heavy veggies were tender crisp and the minced shrimp was almost non-existent.

A mince of the meat is common in egg roll preparation, but this is a REALLY small mince and there's flat out not much of it.

I sampled the pork egg roll last and it was the best one of the three.  For whatever reason the mince on the pork wasn't as small and there was a larger portion of it.

Costing me $1.25 each at Dollar Tree, I'm giving Imperial Gardens Egg Rolls 3 out of 5 Bachelor on the Cheap stars.  They deliver a nice exterior crunch, but the filling is lackluster making these egg rolls NOT worthy of a repeat buy.  In a cost comparison, you can get a 4 count box of Chung's brand egg rolls for about $3.99, or an 8 count box of Pagoda egg rolls for $7.99 at the mainstream grocery store.  I've had the Pagoda before, it's a superior egg roll to what I sampled on this occasion. It doesn't happen often, but here's an example of where it's better to go with the mainstream grocery store than it is to buy the Dollar Tree offering.

Enjoy this post?  If you appreciate this review/cost comparison and want to support more great food, product, service review content, recipes and other great consumer content on BachelorontheCheap.com to include cost comparisons, recalls, safety alerts and more, you can help keep this site going with a one-time or a monthly donation.  Just $5 or $10 goes a long way. Thank you so much for your support! ~ Mike