Best in the Metro Taco Challenge 2022: How does Fuzzy's Taco Shop rate? 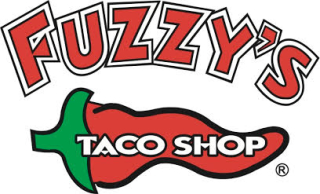 Traveling around the Wichita Metro, I'm sampling the taco offerings from just about any joint that has tacos on the menu.  It doesn't really matter who, I'll be eating tacos from local joints, regional restaurants and the national chains.  To determine a true champion of tacos in the metro, a broad sampling has to be taken in order to measure the best.  I'm on a mission in the name of "taco science" (cough). 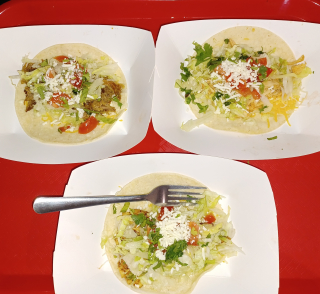 October 4, National Taco Day, a Taco Tuesday and to honor the day, Fuzzy's Taco Shop had select tacos for just $1.50.  Along with Happy Hour where beer was half price, how can a guy pass that up?  I am Mr. Bachelor on the Cheap after all...  Winner, winner, inexpensive taco dinner!

I entered Fuzzy's Taco Shop at about 3:45pm and had a seat at the bar.  The gentleman tending the bar saw me enter and park it on a stool but he soon left the bar area without greeting me or take a drink order and left to tend to something else outside the restaurant.  Not a good start.  After about 10 minutes and the bartender still not back, a lady doing some prep work near the kitchen area noticed the bar unattended and came over to cover the bar, I don't think she knew where the gentleman went either.  I think I overheard his name to be Chris but I could be wrong on that, ticket says "Bar4." At any rate, the lady poured me a cold beer and placed my taco order. 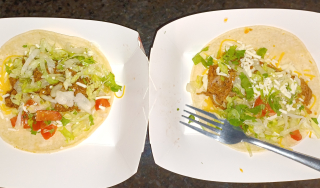 For my order I went with Carnitas, shredded brisket, shredded chicken and ground beef.  Those were the select tacos for $1.50.  For a fish taco sample, I went with the Grilled Mahi which rang up at $2.99.

All their tacos feature the respective seasoned meat, served on a soft corn tortilla topped with their signature garlic sauce, lettuce, tomatoes, shredded cheddar cheese, cilantro, and what I think is a really nice add, feta cheese.

Fuzzy's cranks out some very tasty tacos.  Some would call them Americanized, but what they do is put a modernized twist on old school classics.  The Carnitas is a prime example of an updated version of a Mexican classic.  The meat was perfectly seasoned, moist and tender, their recipe is on point.  The soft corn tortilla was warm and held together from first bite to last. The garlic sauce is a nice spin, an aioli rather than a crema, packing on another layer of flavor. The lettuce was fresh and veggie crisp, I got the cilantro notes along with the slightly melted cheddar - c'mon, who doesn't like cheddar on a taco?  The tomato helped balance things out and putting a little zest in the flavor profile was the feta cheese, another spin from traditional, such as using a Queso or Cotija cheese.  With all the taco dressings being the same - which actually allowed me to better evaluate the main ingredients - the meats were all very well seasoned, nice in portion and were indeed the stars of each taco.  The shredded brisket measures up to a good Barbacoa, The shredded chicken was super tender and juicy, the ground beef was eye-opening good exceeding expectation and my favorite of the bunch, the Grilled Mahi were bites I savored, saving the best for last. 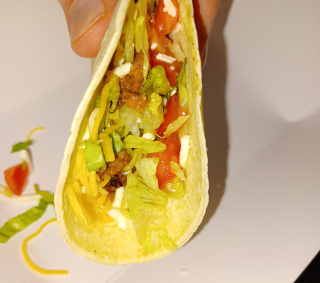 Now that's a nice tasty looking fold right there, yes'sir...  All ingredients in every bite.

Costing me $8.99 for just the tacos (my total tab was $15.03 with the beer), Fuzzy's Taco Shop lineup of tacos scored 56 points out of a possible 63, earning 5 out of 5 Bachelor on the Cheap stars.  I got all ingredients in every enjoyable bite and all the tacos are easy repeat buys, even at full price.  But on National Taco Day, it doesn't get much more Bachelor on the Cheap wallet friendly than that!  Thank you Fuzzy's!

Located at 306 N Rock Rd Suite 30, Wichita, KS 67206, the service at Fuzzy's Taco Shop was less-than-stellar.  The gentleman bartender finally came back, but he remained for the most part inattentive, preoccupied and would disappear again for periods of time.  The lady covering the bar while the gentleman was away did a nice job.  The kitchen was fast and the taco prep spot on.