BOTC Home About BOTC Contact BOTC Book a Shopping Review Wichita Dining Scene Archives Weather Grilling Good Eats Jobs Buy Me a Coffee
Ranking the Fast Food and Fast Casual Burgers, they are listed here from worst to best of
Oktoberfest at Prost! SEP 26, 2019 AT 11 AM – SEP 29, 2019 AT 3 PM 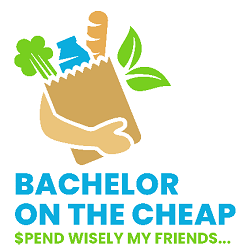 A lot of burger joints in the Wichita Metro claim to have the best burger around, but who really does?  For all the nuances involved in the crafting of not just a good, but a great burger, the bite that really matters is all about the beef!

Traveling around the Wichita Metro, I've sampled the burger offerings from just about any joint that has burgers on the menu.  It didn't really matter who, I ate burgers from local joints, regional restaurants and the national chains.  To determine a true champion of burgers in the metro, a broad sampling had to be taken in order to measure the best.  I was on a mission in the name of "burger science" (cough).

During the course of this Challenge, I evaluated Bacon Cheeseburgers.  The way I see it, if a burger joint can't put together a classic bacon cheeseburger and do it well, then there's no reason to sample any other burger options.  So there were no hot links & onion strings, no habenero & mango, no avocado or fried egg, etc., versions of burgers sampled.

As a former Certified Competition BBQ Judge, I took that scoring system and tweaked it to judging burgers. Being evaluated on a point system scorecard were a plethora of categories that included but was not limited to the appearance, meat, bun, meat to bun ratio, the cheese, how the burger was dressed (that means the assortment of veggies, sauce and/or condiments for those of you who live in Haysville), price and of course, the TASTE.  With each category being evaluated on a scale of 1-9, the best possible score was a 63.  In the event of a tie score, the tiebreaker was the cost.  The burger with the better dollar value was ranked higher on the chart.

I'll be posting all the numbers for each and every burger sampled in a detailed final report, but here's how the Top 10 plated up, starting with Number 10: 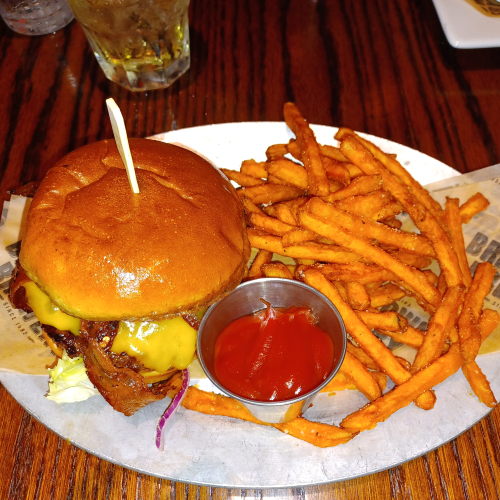 Number 10 - Bricktown Brewery:  Costing me $15.05 with tax for the burger and fries, the Bricktown Brewery Bacon Cheddar Burger scored a 58 out of 63 possible points, earning it 5 out of 5 Bachelor on the Cheap stars.  The burger was so nicely balanced and while that generous portion of 'Burger Sauce' made for a messy burger eat, it did kick things up a notch.  Anytime you have burger juices and sauce running down your hand, a.k.a. FLAVOR, it's a good thing.  Of note:  Best Sweet Potato Fries of the Challenge. 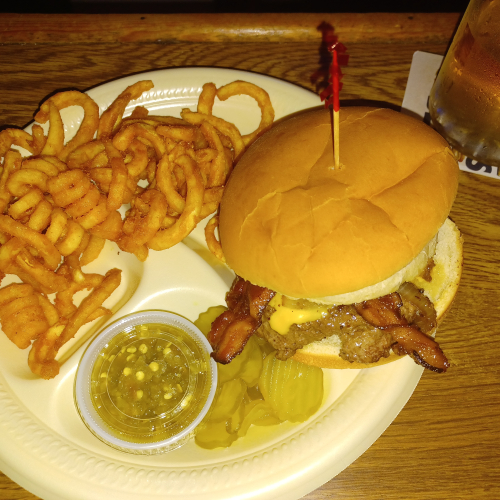 Number 9 - Timbuktu Bar & Grill:  Costing me $13.50 before tax for the burger and fries, the Timbuktu Bar & Grill Timbuktu Original Burger with a bacon add scored 58 out of a possible 63 points earning it 5 out of 5 Bachelor on the Cheap stars.  The perfect execution of this flat top burger is what makes it.  Reasonably priced, it's definitely worthy of a repeat buy.  Of Note: Best Curly Fries of the Challenge. 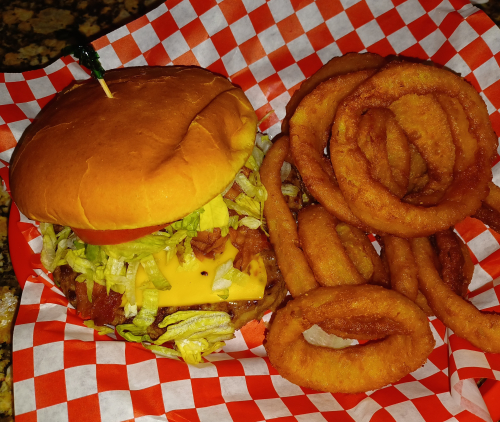 Number 8 - Harry's Uptown Bar & Grill: The entire basket was as I like to say, Another Dose of YUM!  Costing me just $12.87 for the burger and rings basket, Harry's Uptown Bar & Grill and their 'Bacon & Cheese' Burger scored 58 points out of a possible 63, a score earning a 5 star Bachelor on the Cheap rating.  And did you see that price?  We're talking a 1/2 pound burger!  Not only is it a fantastic burger, what Harry's cranks out in fine fashion is Bachelor on the Cheap wallet friendly too.  Of note:  Best Onion Rings of the Challenge. 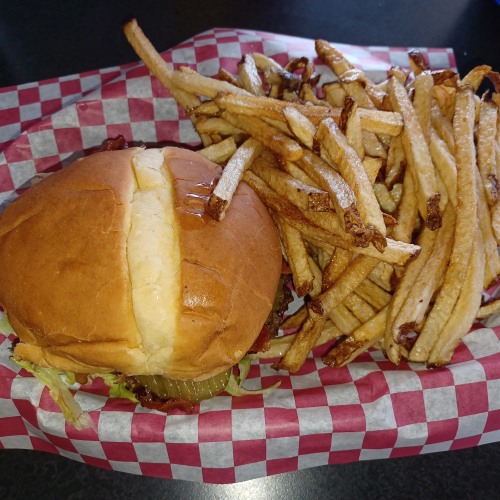 Number 7 - Burger Central:  Costing me $8.59 for the burger, side and a drink, the Burger Central Bacon Cheeseburger scored 58 points out of a possible 63, earning it 5 out of 5 Bachelor on the Cheap stars.   The burger was flavorful, juicy, stacked well and very balanced.  Burger Central crafts a top notch classic bacon cheeseburger and it's Bachelor on the Cheap wallet friendly at only $8.59 for the basket.  This is a repeat buy, a burger I would order again, and again, and again.  Burger Central mistakenly gave me fries instead of tots.  They immediately caught the error and served me up some tots, which were the Best Tater Tots of the Challenge. 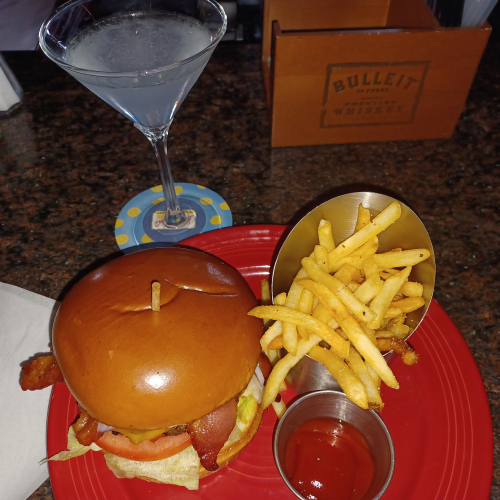 Number 6 - Deano's Grill & Tapworks:  Costing me about $14 for the burger and fries, the Deano's Grill & Tapworks Classic Cheeseburger with a bacon add on scored 59 points out of a possible 63, earning it 5 out of 5 Bachelor on the Cheap stars. It's most definitely a repeat buy and deserves to be on your burger to try list if you haven't done so already. 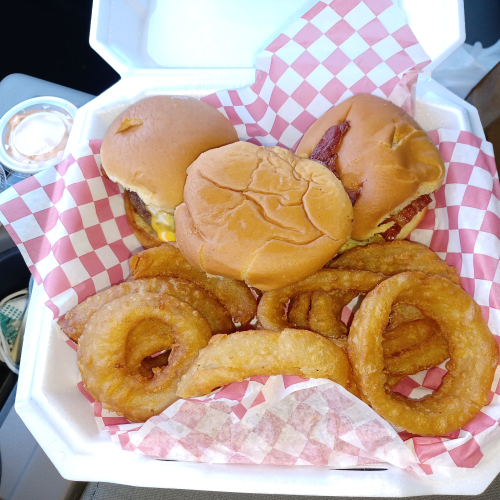 Number 5 - Slider Shak:  Costing me $13.27 with tax for the sliders, onion rings and a drink, the Slider Shak Bacon Cheeseburger Sliders scored 59 points out of a possible 63, earning 5 out of 5 Bachelor on the Cheap stars. This is NOT your typical slider, both the patty and the slider overall is slightly larger than your average slider but that's not what makes it so much better. It's a top notch slider because of the outstanding execution in preparation and it's done with quality ingredients. Both the Slider Shak Bacon Cheeseburger sliders and onion rings are definitely repeat buys! 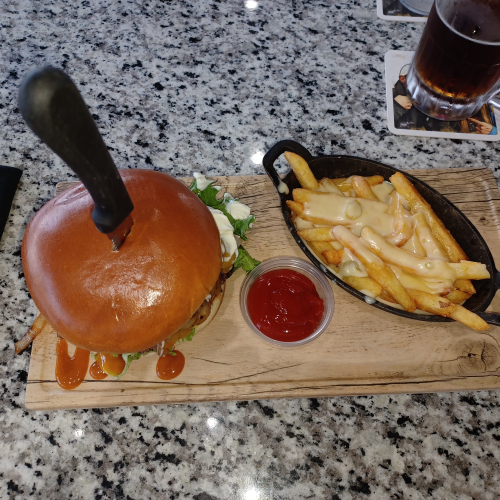 Number 4 - Angry Elephant:  Costing me a lunch special price of $9.99 for the burger and $1.50 for the fries for a total of $11.49 before tax, the Angry Elephant Angry Angus Burger scored 59 out of a possible 63 points and earned 5 out of 5 Bachelor on the Cheap stars. The Angry Elephant cranks out an excellent upscale burger for a very reasonable price and it's most definitely worthy of a repeat buy. Talking a little trash on their online menu, they back it up. Of Note: Best Presentation AND Best Bacon of the Challenge. 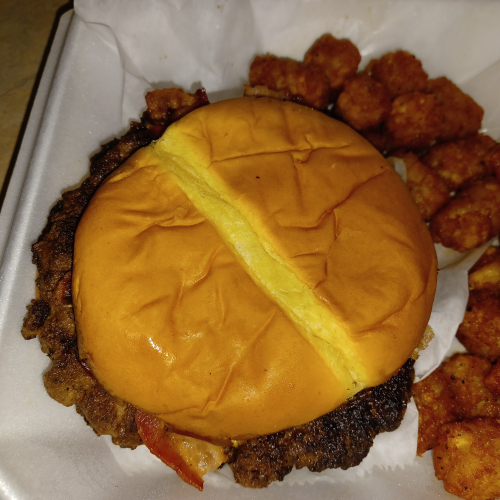 Number 3 - Buster's Burger Joint:  Costing me $11 plus hitting the tip jar, the Buster's Burger Joint Double Cheeseburger with a bacon add scored a 59 out of a possible 63 points earning it 5 out of 5 Bachelor on the Cheap stars.  Buster's is VERY Bachelor on the Cheap wallet friendly, the value is tremendous and if Buster's isn't already on your burger to try list, it should be! Of Note: Best Burger Value of the Challenge. 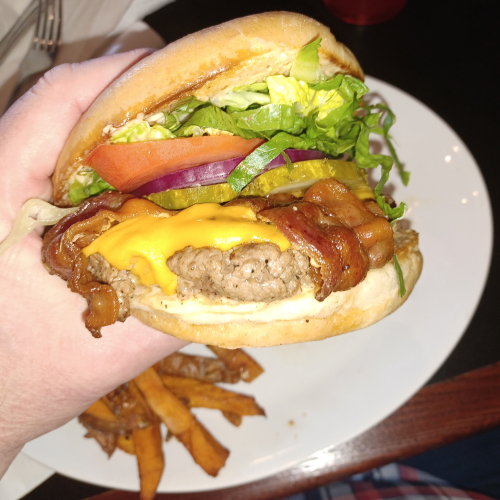 Number 2 - Fizz Burgers & Bottles:  Costing me $19.88 for the burger and side, the Fizz Burgers & Bottles Bacon Cheeseburger scored 60 points out of a possible 63, earning it 5 out of 5 Bachelor on the Cheap stars.  This was the most expensive burger of the Challenge, but also tied for the highest scoring, one of the tastiest.  An upscale burger weighing a 1/2 pound, utilizing the freshest ingredients and pairing it all with a one-of-a-kind sauce makes for an excellent burger experience, one very worthy of a repeat buy.  The 1/4 pound version is available for $12.  And here's another tell on how good this place is, by the time I left at around 11:45am, the place was nearly full with customers. 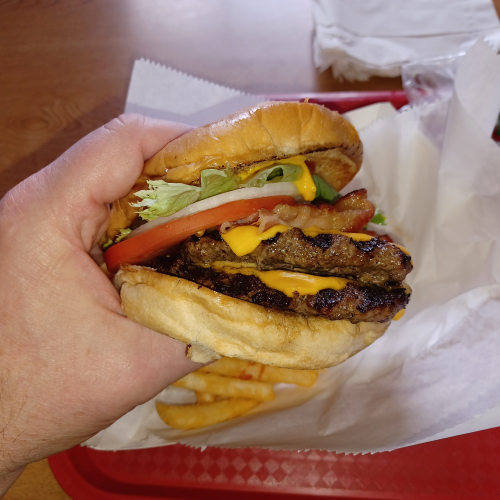 Number 1 - Bill's Charcoal Grill:  Costing me $15.85 for the burger, fries and a drink, the Bill's Charcoal Grill Double Cheeseburger with bacon scored 60 out of a possible 63 points earning it 5 out of 5 Bachelor on the Cheap stars.  This is a repeat buy, again, and again, and again... The best burger beef of the Challenge.  Of Note: Runner Up for Best Regular French Fries.

Item of note, 9 establishments in the Top 10 are local.

These were all 5 star burgers.  Here are the other burgers who scored well enough to earn a 5 star rating (tallying 56 points or more), but fell outside the Top 10, a Bachelor on the Cheap 5 star Honorable Mention if you will and all worthy of repeat buys:

The remaining burgers sampled during the course of this challenge scored lower, earning 4 stars (tallying 49-55 points) or 3 stars (42 to 48 points).  Those detailed scores will be posted in the final report.  I'm pleased to report that nobody presented a truly awful burger (although Applebee's was close) receiving a 2 or OMG a 1 star rating.  But I will say that a 3 star rating is not really worthy of a repeat buy given all the goodness out there in the Wichita Metro, 4 stars and up.  And another Kudos to the local establishments, which overall, consistently outperformed regional restaurants and national chains.

Related:  Ranking the Fast Food and Fast Casual Burgers, they are listed here from worst to best of

Related: Takeaways from the Best in the Wichita Metro Burger Challenge 2022 and the Best Burger Deals

Shout out to Vicki S., who helped me put the Burger Challenge List of Burger Joints together.  She's a fellow foodie in hiding.