Have you ditched cable TV yet?  If you haven't, don't you think it's about time?

I first ditched cable TV back in 2016, going with a basic ROKU streaming player instead.   I maintained the internet service provided by Cox Cable so I could stream, but dropping the TV portion of my cable package saved me about $60 a month at the time.  I did lose a quite a few choice channels in that transition - most notably ESPN - creating sports programming withdrawals.   Those withdrawals and the ever-increasing price of cable TV, eventually motivated me to buy an indoor HDTV antenna.  That low cost, one-time purchase of a HDTV antenna allowed me to get all the local channels - and FOOTBALL - no frick'n monthly subscription required!  It was perfect for the apartment I was living in at the time. 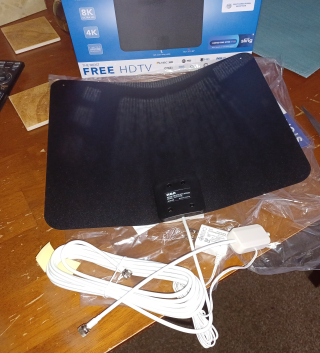 That antenna has served me well and is still in use today, but I've taken on a new project that involves multiple TVs.   I'm turning what has been a traditional family room style space in my house - fireplace, couch, love seat, a large flat screen TV, stereo, coffee table, side tables  - into a "Man Cave" Bar & Grill!   The traditional furniture has been removed, I'm going all out Bar & Grill here, TVs on every wall, enhanced lighting, full bar, bottle/beverage cooler, stools for the bar and bar table seating in the open area.  I might even have enough space for an arcade game or two.

The Mohu Leaf mini Indoor HDTV Antenna I bought back in 2017 cost me $18, but has limited range.  It picked up all the major network affiliates in town and then some in the apartment I lived in at the time.  Easy to optimize, I got ABC, CBS, FOX, NBC, PBS and a number of other channels, 31 in fact.  Now some of those are duplicates to include a variety of shopping networks which I could give a rat's rear end about...  The free local affiliate stations are all that really mattered, especially at this time of year - FOOTBALL!   But in moving from that apartment to a house, well, that antenna doesn't pick up as many channels.  The channel count dropped from 31 to 17.  I still get CBS, FOX and NBC, but the signal for ABC is really weak, I get the pixelated screen thing, rendering that channel unwatchable.  I lost the ability to view football games broadcast by ABC, but am still able to watch football games carried by the other affiliates.

With the Bar & Grill project underway, it's time for an HDTV antenna upgrade! 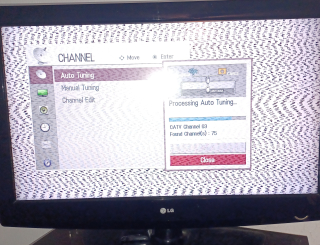 As the TV was Auto Tuning I left the room to do something, came back in and saw "75 Channels"... Nice! That's a big step up from just 17.

Costing me $39.88 + tax, this new antenna has a much greater range and is NEXTGENTV compatible.  With this antenna upgrade, I now get 75 channels!  Yes, some of those are duplicates to include some of those dreaded shopping network channels - UGH!  But the new antenna is picking up a slew of other channels to include, retro, game show, western, sci-fi, sitcom, drama, etc. entertainment.  The advantage I now have with this RCA antenna and it's superior lineup of channels is I'll be able to run a splitter, connecting multiple TVs to this one antenna.  I could do that with the old antenna too, but why bother?

Easy to install, all you have to do is connect the cable end to your TV, plug it in, then find the best placement for the antenna for optimal channel reception.  I took advantage of using the RCA Signal Finder App which helps you find the best location and orientation for your antenna.  That app helped me avoid the trial and error method of tacking the antenna one one part of the wall, then hitting the scan feature on the TV, then relocating the antenna to another section of wall and repeating that scan process until I found the maximum number of channels.  All the channels I'm getting with this new antenna are coming in with strong, clear High Definition, there's been no pixelated crap to worry about so far.

If you haven't ditched cable yet, now is the time to do so using a HDTV Antenna.  You'll save some nice pocket money doing so, not having to pay that cable TV bill every month.  And if you're a football fanatic like I am, you can subscribe to a streaming service like Sling to get ESPN (and a host of other channels) and STILL spend less than you were on cable TV!

Related:  Get Free HDTV with an Indoor Antenna