How does Five Guys rate in the Best Burger in the Metro Challenge? 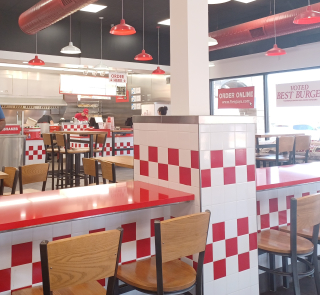 Five Guys is an award winning Fast Casual burger chain, winning the coveted Zagat award for Best Burger and unseating perennial champ In-N-Out Burger back in 2010.  And they kept winning, scoring the Harris Poll's Burger Brand of the Year award in 2017 and 2018.  They won a 2022 "Fasties" award for Best Fast Casual French Fries in April. They've won multiple awards in multiple categories over the last decade-plus beating notable competitors like Freddy's Frozen Custard & Steakburgers, Shake Shack, Smashburger, Whataburger and Zaxby's.  They've also cleaned up against the likes of Burger King, Carl's Jr., McDonald's, and Wendy's, no real surprise there. 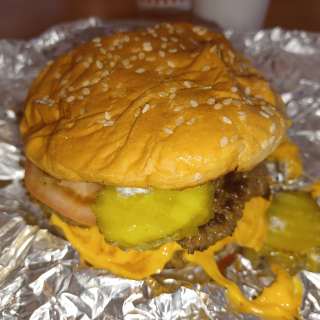 So with that reputation in mind, I went to Five Guys for my burger lunch today, ordering their Bacon Cheeseburger.  Here's the description from the Five Guy's website:  Fresh patties hot off the grill with American-style cheese and crispy apple-wood smoked bacon. Placed on a soft, toasted sesame seed bun. Choose as many toppings as you want.  That's something I really appreciate at Five Guys, they don't charge extra for additional toppings.   I ordered my burger "All the Way' which means it came with tomatoes, pickles, grilled onions, grilled mushrooms, ketchup, mayonnaise, lettuce, and mustard.  And I wasn't limited to that, I could have added raw onions, relish, jalapeno peppers, green peppers, BBQ sauce, hot sauce or A-1 Sauce at no additional charge.

Bacon in every bite!

My made to order burger was stacked tall, it was a challenge getting a complete first bite mouthful.  Five Guys cooks all their burgers until well done (160 degree internal temp) using a smashburger style of prep so you're not going to get any pink running through meat.  But that's OK, their proven process does not deny you a juicy burger.  Five Guys also knows how to apply bacon to a burger, it is a BACON cheeseburger after all, not a "Bacon on the side" burger...  But I digress.  All the toppings and condiments were for the most part spot on.  This burger was nicely balanced, scoring 8 points out of 9 points possible in each of 7 burger categories. 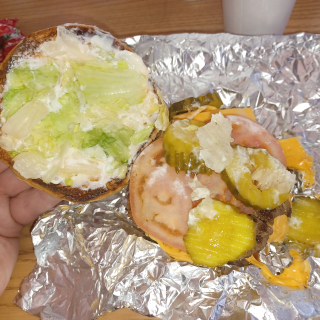 Good coverage of veggies & condiments, but not the ripest tomato.

Side Note:  Even though Five Guys calls it a "Little Fry" on the menu, it's a very generous portion. I got one scoop to fill the container and it seems a second scoopfull was laying on the bottom of the brown bag the meal came in!  They were nicely fried, seasoned well and provided the lightly crisp on the outside, fluffy spud goodness on the inside bite you're looking for.  I can see why Five Guys has won an award for Best Fast Casual fries, but I'll drop a hint to be revealed in the final report, they're not the best fries I've had in this Challenge.

Costing me $16.87 to include tax for a 1/2 pound burger, "Little Fry" and a drink, the Five Guys Bacon Cheeseburger scored a total of 56 points out of a possible 63, earning it 5 out of 5 Bachelor on the Cheap stars.  It may be on the higher end of pricing for a premium Fast Casual burger, but it's most definitely a repeat buy.  I've been to more than a couple places during the course of this Challenge and got 'nickle and dimed' for additional toppings, driving the price of the burger up past the Five Guy price. 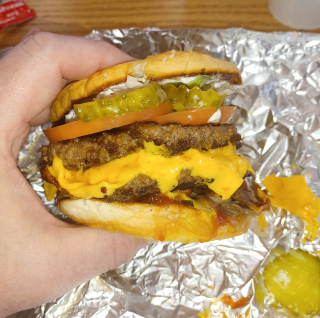 Located at 2929 N Rock Rd Suite 110, Wichita, KS 67226, the service at Five Guys was professional and efficient, the restaurant clean and orderly.  Arriving at close to 2:30pm, there were just two other customers in the place when I walked in but Five Guys was quickly hit with a mini rush, all of a sudden there was a line forming to order.   It was handled easily by the crew.

The thing that makes Five Guys a cheap (economical) choice is that you get enough to call it two meals.