It's a holiday weekend, Labor Day, and after taking a bit of a hiatus from burgers over the weekend - I grilled up ribs, marinaded pork tenderloin and bratwursts instead - I resumed the Burger Challenge for lunch today.  I actually purchased burgers from two places, going fast food for a side-by-side comparison of sorts, Spangles vs. McDonald's. 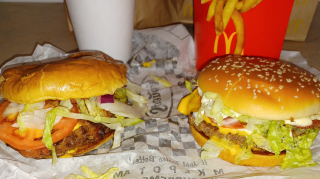 Bacon added to both, which one would you prefer?

For those of you still wondering why I included places like Spangles and McDonald's in this Challenge, I wanted to see exactly where they rank on the scoring chart. I'm curious to see who makes the best fast foot burger and with fast food being a bit habitual - most folks tend to go to the same few places - I think the burger info might surprise some people.  Perhaps a few out there reading these reviews might be more open now to trying a place they haven't before or kind of forgot about.  When is the last time you went to an A&W for example? 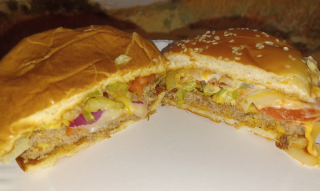 Whose burger is better?

Taking advantage of a delivery app this date and crossing my fingers a stranger didn't help themselves to any fries I ordered a Quarter Pounder w/cheese Deluxe with a bacon add from McDonald's.  In keeping with the parameters of the Challenge, it was a Value Meal to include fries and a drink.  For the side-by-side fast food comparison, I ordered the Gourmet Supreme w/bacon combo from Spangles.

Here are the descriptions of each, respectively:

Moving in for that first bite... 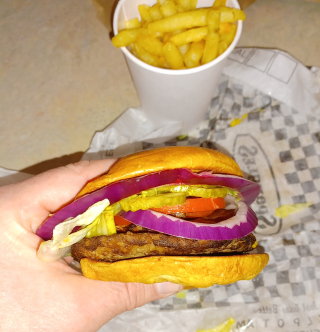 Kudos to McDonald's for the better description and marketing.

Receiving my meals in a timely fashion, both combos were warm and it looked like the french fry orders were untouched.  In the side-by-side visual, McDonald's gets the nod with the sesame seed bun, but that's not saying a whole lot, we're talking fast food combo meals here.  The Gourmet Supreme is the larger burger with the patty weight of 1/3 pound vs. the McDonald's 1/4 pound.  All other ingredients were for the most part the same but with  notable differences being a sesame seed bun making for the better visual, mayo and a second slice of cheese on the Quarter Pounder. 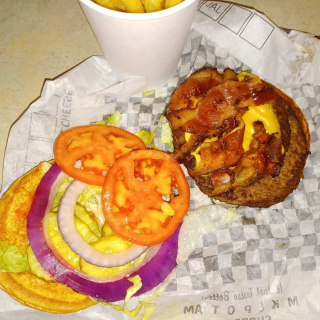 Both burgers were under seasoned and over cooked, which is typical in fast food, with the McDonald's patty being the 'less dry' of the two.  Spangles had the better bacon, providing better coverage on the burger.  The Spangles bacon had a slight crisp, the McDonald's stuff, not so much, pretty whimpy in fact.  The red onion on the Gourmet Supreme was pronounced, the slivered onions on the Quarter Pounder went largely unnoticed and unnoticed because the burger was over dressed with mayo.  Too much of a good thing.  You want condiments to compliment the burger, not overpower it. 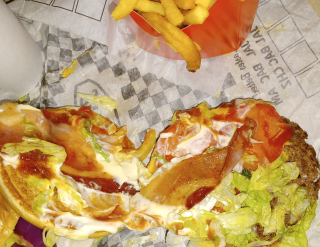 Whimpy McDonald's bacon and didn't get bacon in every bite

Side Note:  I prefer the texture of the Spangles fries over McDonald's and they were seasoned better.  I'm not sure why some people remain so loyal to McDonald's fries, as other restaurants have stepped up their game when it comes to sides.  Perhaps those loyalists are the kind of folks I referred to earlier, customers afraid to venture outside of their comfort zone.

Costing me $10.62 for the Value Meal, the McDonald's Quarter Pounder with Cheese Deluxe and a bacon add scored 48 out of a possible 63 points earning it 3 out of 5 Bachelor on the Cheap stars.  I've never really been a huge fan of McDonald's, but now that I've become a Burger Snob in conducting this Challenge, Micky D's is REALLY not a repeat buy.

Costing me $11.27 for the combo meal, the Spangles Gourmet Supreme with a bacon add scored 47 out of a possible 63 points earning it 3 out of 5 Bachelor on the Cheap stars.  I actually prefer the Gourmet Supreme over the Big Mac, but not over the Quarter Pounder.  I've even recommended Spangles promote the heck out of the Gourmet Supreme if they want to become something more than a Regional restaurant.  But they would have to tweak this burger to get some more flavor out of it.  Like McDonald's, Spangles is not worthy of a repeat buy, not even among other fast food restaurants.