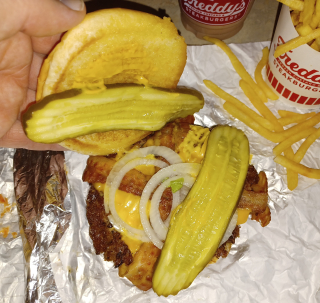 Great pickles, nice cut & coverage, but that bacon... Pickle in every bite, but not the bacon? 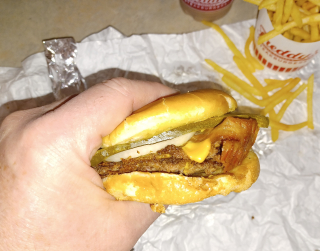 For today's lunch I went with Freddy's and Wendy's.  Opening in 1969, Wendy's is the #2 burger chain in the country.  Freddy's got its start in 2002 right here in Wichita and is ranked #14 on the burger sales chart.

Freddy's Order:  Bacon & Cheese Double Combo - Two steakburger patties, cheese, mustard, onion, pickles & bacon on a toasted bun. Served with your choice of side & a drink.   Along with the burger I got Freddy's fries and a half & half (half vanilla, half chocolate) shake. 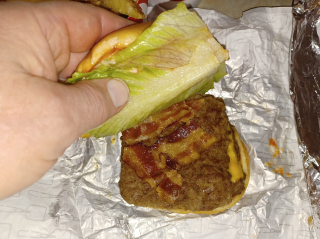 A bit sloppy, but better bacon coverage, a 4th half slice is tucked under another in the back.

Wendy's Order: The Big Bacon Classic Double - A half-pound* of fresh beef, Applewood smoked bacon, American cheese, crisp lettuce, tomato, pickle, ketchup, mayo, and onion on a toasted bun. It’s big. It’s classic. It’s got bacon.  Along with the burger I got Wendy's 'new' fries and a half & half (half chocolate, half strawberry) frosty.

I went for the Freddy's burger first.  Freddy's knows how to properly season a burger, period.  They do a thin patty, but they put a good crust on it developing another layer of flavor in addition to their seasoning.  You almost have to order a double minimum though at Freddy's, a single thin patty just won't do, it throws off the meat to bun ratio.  The bacon was crisp, but applied using the "X" method, so I didn't get bacon in every bite.  I really like Freddy's pickles, they're cut long, they're crisp, they're tart and coupled with the mustard and onion make a really nice bite in that style of burger make up.  The cheese had a nice melt and while the bun had a nice toast, it was otherwise ordinary. 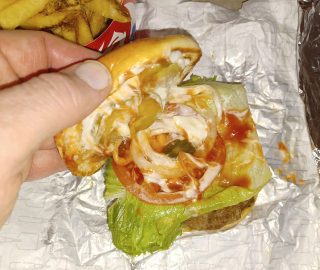 Under seasoned beef and condiment overkill

After sampling Freddy's, I had a go at Wendy's.  The burger patties were under seasoned, it's like Wendy's relies on the condiments to round out the flavor profile rather than truly make the beef the star.  It's a missed opportunity, we're talking a 1/2 pound of beef.  There was better bacon coverage in this burger, the "X" method was NOT used which I truly appreciate.  The veggies for the most part were on point (a little pickle shy), but the burger was over dressed with mayo and ketchup.  Condiments should compliment the burger, but as I already stated, it's like Wendy's relies on this to carry the burger somehow.  But that strategy results in a minus, not a plus. 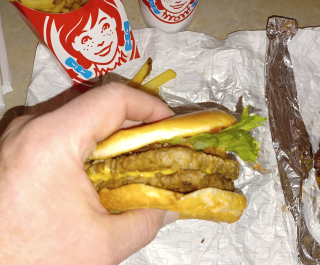 That 1/2 pound of beef lacked flavor

Side Note:  I'm not a big fan of Freddy's fries, they are the thinner, shoestring style of fries.  They had a good fry on them, the exterior had a nice light crunch but the reason I'm not a big fan is because the shoestring cut of fry doesn't give you enough fluffy spud goodness on the inside.  Wendy's recently changed their fry, going from a standard straight cut fry to more of a natural cut and it has indeed improved their offering.  I prefer them over Freddy's and McDonald's.

Costing me $12.67 for the burger, fries and shake, the Freddy's Bacon & Cheese Double scored 54 points out of a possible 63, earning it 4 out of 5 Bachelor on the Cheap stars.  The beef truly was the star of this burger show.  The method used to apply the bacon and the rather ordinary bun prevented this burger from scoring higher, but it's still a fast food worthy repeat buy.

Costing me $12.35 for the burger, fries and shake, the Wendy's Big Bacon Classic Double scored 53 points out of a possible 63, also earning 4 out of 5 Bachelor on the Cheap stars.  Under seasoned beef and over dressing the burger with condiment overkill made for a disappointing burger experience.  Here's a case of a burger with a lot of potential, that under performed.

In the Fast Food Burger Battle, Freddy's vs. Wendy's, Freddy's wins the day. 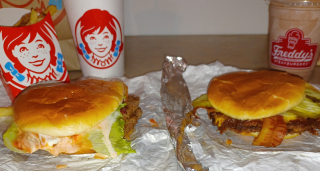 Here's an item of note...  Check out the prices for these fast food burger combo meals, which is fairly typical now in these inflation-ridden times.  I know fast food is convenient, I get that, but for about the same money and 7 times out of 10 about the same amount of time waiting, you can get a better burger and yes a better side at a Wichita local establishment.