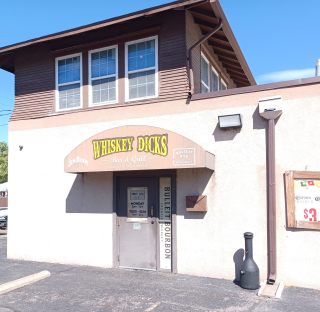 Regular readers know that I've been traveling around the Wichita Metro, sampling the burger offerings from just about any joint that has burgers on the menu.  It doesn't really matter who, I've sampled burgers from local joints, regional restaurants and the national chains.  To determine a true champion of burgers in the metro, a broad sampling has to be taken in order to measure the best.  I'm on a mission in the name of "burger science" (cough).  For the burger criteria, click here.

Nearing completion of this Burger Challenge and having traveled north, south, east and west in the Wichita Metro, today's Burger Challenge lunch took me to Whiskey Dick's which according to their website, specializes in whiskey (it's in the name after all and their line up of whiskeys is impressive) and BURGERS.  Here's a snippet of description from their about page:  Whiskey Dicks is the ultimate sports bar & grill, specializing in whiskey and burgers. Located Just south of Kellogg on Seneca, we are home to one of the largest whiskey selections in Wichita with over 400 different whiskeys. While we specialize in burgers like our version of the Juicy Lucy called the Richard Dick, we also offer tasty food to suit any appetite. 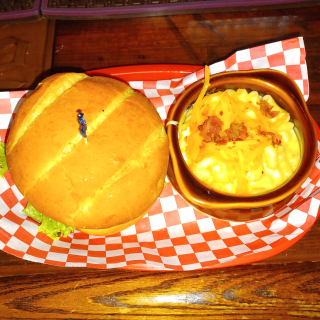 I walked in about a minute after opening time, 11am for my first meal of the day.  I found a seat at the bar and was warmly greeted by Heather who was tending bar.  She grabbed me a Miller Lite per my request and provided a menu.  Yes, I already knew what I was going to order, but I do still like to check out the menu on site, in case I missed something online.  After reviewing the menu and setting it down, Heather was on top of things and asked me what I wanted to order.  I went with their Classic Cheeseburger with a bacon add and instead of the default fries side, I opted for the mac & cheese.  Heather turned and started punching in my order, verbalizing it as she hit the screen, "Cheeseburger with bacon and a mac & cheese."  This becomes key later... 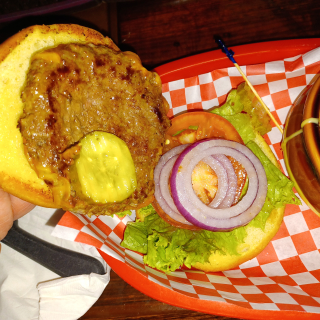 A little sparse on the pickle, but where's the?...

Having a prime seat at the bar I was able to take in some football highlights on ESPN while listening to three guys down a few seats talk about their betting successes and losses over the weekend.  After kind of listening in on the "Could'a, should'a, would'a" regarding players, teams and coaches from the three guys, my burger arrived.

A nice presentation, I just HAD to take a bite of the mac & cheese before taking the under the lid burger pics. Whiskey Dick's makes a stellar mac & cheese, the best I've had so far in this Challenge.  Nodding my head in approval, the YUM factor on the side made me all that more excited about biting into the burger.  But then the under the lid reveal was a let down.  There was no bacon on this burger!  Because this was a review situation, I didn't say anything.  What I am presented is what gets scored.  After taking a few pics, I took that first bite. 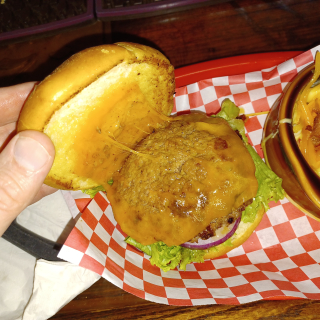 There's no bacon on this burger...

The patty was tender, juicy and seasoned perfectly.  The cheddar had a great melt, bringing out the fullness of cheddar cheese flavor.  The red onion had a nice sweetness to it and the rest of the veggies were spot on with flavor but the pickle was a bit sparse.  There was a good toast on the bun but preventing this burger from cracking my Top 10 List...  The lack of bacon.  Seriously.  This burger packed some great flavors and it's unfortunate the bacon wasn't part of it.  Bacon would have pushed this burger into elite status.

Side Note:  As I stated earlier, Whiskey Dick's makes a stellar mac and cheese.  The pasta was perfectly cooked, the coverage of cheese sauce was excellent and robust with flavor.  Topping things off were those bacon bits...  a nice touch and a perfect flavor pairing with the creamy cheese, a delightful crispy texture contrast to the soft pasta.  Everything is better with bacon! 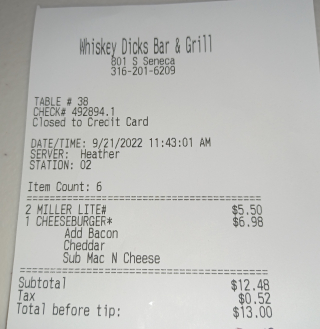 My burger order was entered correctly

Costing me $6.98 before tax for the burger and side, the Whiskey Dick's Classic Cheeseburger with a bacon add (but not added) scored 57 points out of a possible 63, earning it 5 out of 5 Bachelor on the Cheap stars.  Despite the lack of bacon, well, I've already said what needed to be said...  I find myself playing the same game those three guys talking bets at the bar were playing...  "Could'a, Should'a, Would'a..."    Bottom line, Whiskey Dick's Classic Cheeseburger is most definitely worthy of a repeat buy, anytime, not just on 1/2 price Wednesdays. 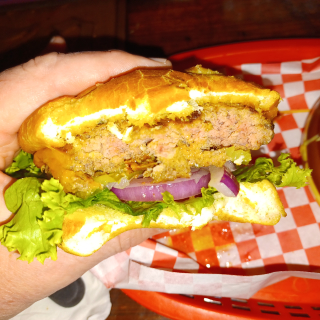 Located at 801 S Seneca St, Wichita, KS 67213, the service at Whiskey Dick's is top notch.  Heather was friendly, attentive and didn't miss a beat on anything.  Other staff members busy about the bar were equally friendly and attentive as well, ensuring I enjoyed my burger experience.