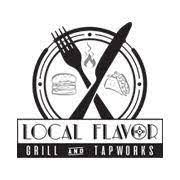 Regular readers know that I've been traveling around the Wichita Metro, sampling the burger offerings from just about any joint that has burgers on the menu.  It doesn't really matter who, I've sampled burgers from local joints, regional restaurants and the national chains.  To determine a true champion of burgers in the metro, a broad sampling has to be taken in order to measure the best.  I'm on a mission in the name of "burger science" (cough).  For the burger criteria, click here. 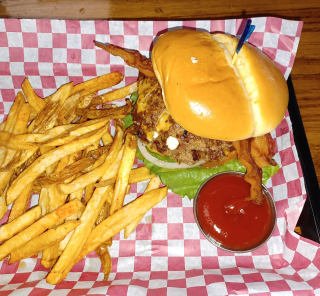 Nearing completion of this Burger Challenge and having traveled north, south, east and west in the Wichita Metro, today's Burger Challenge lunch took me to Local Flavor Grill and Tapworks on East Central.  Opening last summer in a space previously occupied by Gallery 54 Antiques, Owner Jeremy Snyder came to local burger fame as the Owner of Broadway Burgers & BBQ.  He's taken his new operation upscale with a menu that features not only burgers and BBQ, but local beer, sandwiches, salads, tacos, fish & chips, a smoked salmon dip appetizer and much more. 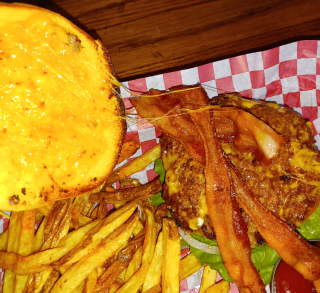 I walked in a bit after 11 am and was nicely greeted by Vicki who was busy doing some prep work.  It's open seating at Local Flavor so I grabbed a table near the bar and as it turns out, a table in Vicki's section.  She took my drink order, a water, as I looked over the menu and waited for my lunch date to arrive.  The Local Flavor menu has a lot of great sounding options, but yes, I already knew what I was going to order and in this case I ordered what Local Flavor calls, "The Local," a classic cheeseburger.  Served with cheddar cheese, I requested lettuce, tomato, raw onion, pickle and a bacon add.  If you're familiar with the Broadway Burgers & BBQ way of doing things, you have to request toppings, it's not an 'automatically comes with' thing, so naturally, it's the same set up at Local Flavor.  For my side, I went with the fries.  My lunch date, also named Vicki, ordered the Bacon Bleu burger with a side of fries. 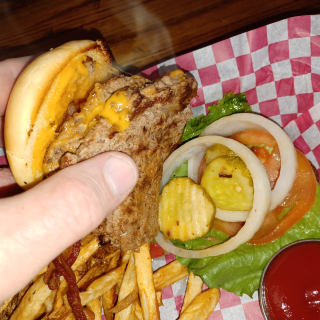 Check out the steam coming off the beef!

It didn't take long for our burgers to arrive and they were steaming hot!  With the history of Broadway Burgers in mind, I was looking forward to an upscale burger bite, but in taking that first one, the takeaway was how under seasoned the beef was.  It was a generous amount of beef, had a decent crust and was juicy, but it was rather bland tasting.  So was Vicki's Bleu burger which was also under seasoned and could have used a bit more Bleu.  We both reached for the salt and pepper.  The bacon was crispy and had good flavor, but was applied using the "X" method so I didn't get bacon in every bite.  The veggies were for the most part on point, the cheese had a great melt elevating the cheddar flavor to robust and there was a nice toast on the bun. 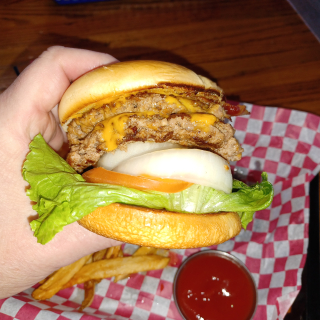 That's a mouthful of burger!

Side Note:  The natural cut fries were kind of a downer.  Way under seasoned, they were also a bit wimpy, lacking a good exterior crispiness and the potato inside was a bit soggy rather than fluffy.  Both Vicki S. and I had to salt our fries and dunk in ketchup, I even added some mayo to the mix.  The fries either didn't get the benefit of a second fry, or the oil temp wasn't hot enough.

Costing me $13.98 for the burger and fries, the Local Flavor Grill and Tapworks "The Local" cheeseburger with a bacon add scored 55 out of a possible 63 points earning it 4 out of 5 Bachelor on the Cheap stars.  The lack of seasoning kind of handcuffed this particular Burger Challenge lunch.  It's a reasonably priced bar & grill burger w/fries, an overall good burger, but not great.  Of note, Local Flavor takes $2 off all burgers on Wednesdays.

Located at 5400 E Central Ave, Wichita, KS 67208, the service at Local Flavor was excellent.  Vicki provided great service, she was friendly and attentive.   Vicki S. and I both stated we'd come back again, looking forward to trying another menu option, probably those tacos!