Best in Wichita Metro Burger Challenge 2022: How does the Angry Elephant rate? 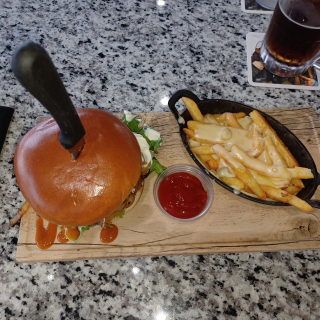 The Angry Elephant boasts of having Wichita's Best Burgers on their menu, so that's where I went today for lunch. I visited their new location on East 47th Street South.  They did a really nice job of renovating an old Burger King.

Walking in right at opening time, 11am, I was greeted nicely by a member of the staff who was busy at the host station.  Flying solo, I found a seat at the bar.  Dakota, the bartender, greeted me warmly, set me up with a coaster and asked what I would like to drink.  Not familiar with their lineup of beers, she provided both the drink and food menus and inquired if I'd like a glass of ice water.  I like the restaurants that proactively ask if you'd like some water, it's nice not to have to request it. 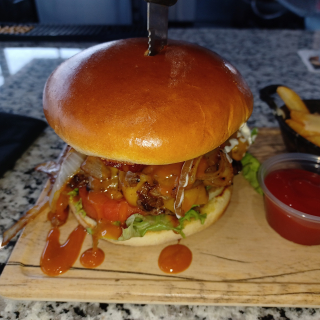 After perusing the drink menu, specifically the list of beers, I went with the Warbeard Irish Red.  And already knowing what I was going to have for lunch in looking online prior to arrival, I let Dakota know I wanted to try the Angry Angus Burger.  After some playful conversation, she poured my beer and placed my lunch order.  Here's the Angry Angus Burger description from that online menu:  Two All Beef Patties, Two Slices Bacon, Cheddar, Mayo, Lettuce, Caramelized Onions, House Pickles, Tomato. 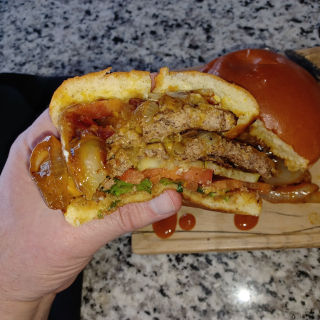 WOW!  This is a messy good eat!  First off, this two patty burger is a beast and that knife was put to good use cutting it in half for easier handling.  The meat was cooked to perfection, seasoned well and juicy, running-down-the-sides-of-your-hands-down-to-your-wrists, juicy.  Several napkins were needed to abate the sauced and juicy burger deliciousness.  The bacon was crisp, it was in every bite and I have to say it was the best bacon I've eaten so far in this challenge.  The veggies were all on point, fresh and generously portioned.  The toasted brioche bun packaged everything up nicely but what puts this burger over the top is the combination of the caramelized onion, mayo and sauce!  What a great marriage of flavors.  Coupled with that savory, perfectly charred beef and melted cheddar...  It's Another Dose of YUM! 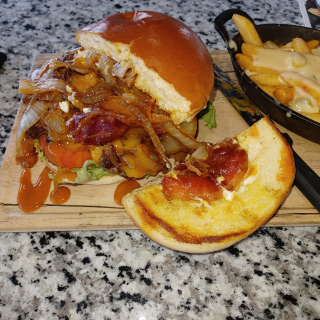 The under the lid reveal, it's loaded

Side Note:  (yes, pun intended)...  The Queso Fries are stellar.  Perfectly fried and seasoned, the potato exterior had a nice light crisp bite and the interior was fluffy spud good.  The Queso is a nice blend of melted, cheesy goodness.  The ketchup provided was not needed, not for the fries or the burger.

Costing me a lunch special price of $9.99 for the burger and $1.50 for the fries for a total of $11.49 before tax, the Angry Elephant Angry Angus Burger scored 59 out of a possible 63 points and earned 5 out of 5 Bachelor on the Cheap stars.  The Angry Elephant cranks out an excellent upscale burger for a very reasonable price and it's most definitely worthy of a repeat buy.  Talking a little trash on their online menu, they back it up.  But will their boast hold up after all the burgers around are sampled?

The Angry Elephant I visited on this occasion is located at 111 East 47th Street South, Wichita, KS. 67216.  The burger was fantastic, the beer was cold and Dakota provided some great conversation and very attentive service.  Thank you kitchen, thank you Dakota!