Best in Wichita Metro Burger Challenge 2022: How does Hardee's rate? 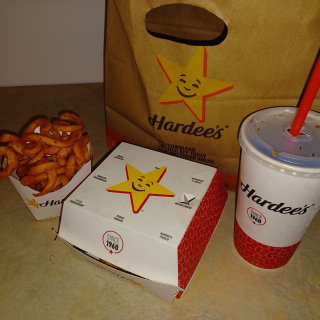 Needing some dinner I visited Hardee's to sample their version of a classic bacon cheeseburger.  It's been about three years since I've had one of their burgers, a Monster Thickburger, which I found to be over-hyped and underwhelming. 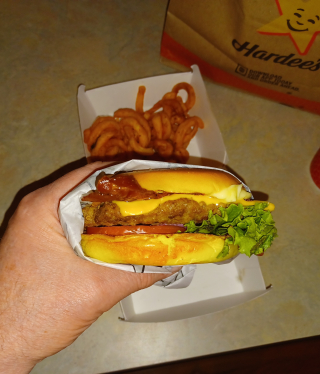 Initial visual reveals typical sloppy fast food prep, lettuce on one side of the burger, tomatoes on the other.  Bacon sticking out like a cow's tongue.

What Hardee's serves is a Whopper wannabe and that's not saying much.  The 1/3 pound patty was overcooked (typical fast food prep) and lacked seasoning.  The bacon had some nice, solid smoky notes but the 'X' application of it... shame on you Hardee's, the consumer doesn't get bacon in every bite!  From a culinary standpoint, that's just a flat out lazy way to put bacon on a burger, I don't care if it's fast food we're talking about.  It fails in the EASY opportunity to provide robust and complete bacon flavor and it does absolutely nothing for visual appeal.  I've given this culinary lesson before, but here I am repeating it for Hardee's: If you're only applying two strips of bacon to a burger, then you either do half slices side-by-side for proper coverage, or you shape the bacon in triangles before cooking.  Two slices of triangle shaped bacon provides excellent bacon in every bite coverage without adding a lot of time to prep work. 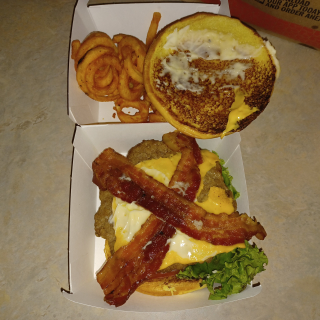 Applying bacon to a burger like this should be a crime!

The rest of the burger was unremarkable as well.  There was the typical sloppy fast food sandwich assembly, with lettuce to one side of the burger, tomatoes to the other side.  The onions weren't exactly a generous portion either, so unless an adjustment was made by yours truly before eating, I wouldn't have gotten ALL veggies in every bite.  The mayo was creamy and there was a nice toast on the bun, saving graces for a burger that has similar flavor notes to a Whopper.

Side Note:  The Crispy Curls fries were pretty tasty.  They that light crispy exterior and the seasoning Hardee's puts on these is spot on. Nice toast on the bun, but otherwise Hardee's pretty much fails at properly making a classic burger.

Located at 3216 E Harry St, Wichita, KS 67218, I hit the drive thru at around 4:30pm.  There was only one vehicle ahead of me in line.  The service was polite but a bit slow.  You would think the soda that comes with the combo meal would be provided to the customer right after they pull up to the window and pay.  A drink to sip on while the wait for the burgers and fries is on...  'jus say'n.

Related: How does Hardee's stack up in the Fish Sandwich Challenge?