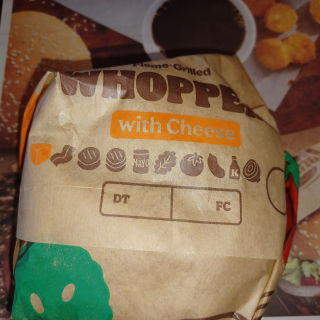 Does a Whopper compete against local burger places?

I was out-and-about running errands on Monday the 8th (Birthday shopping for myself) and it was time for lunch, so I stopped in a Burger King for a Whopper with cheese and bacon.

I know what you're thinking, "Mike, everybody has had the fast food experience, why bother?" 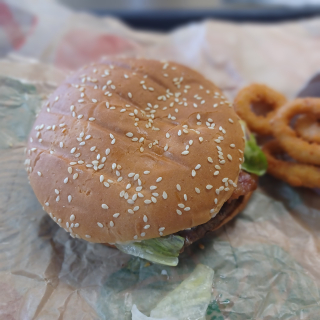 I'm including the fast food joints in this challenge for a number of reasons.  I am interested in who has the best fast food burger.  I know people have their preferences, but that preference doesn't necessarily translate to a better fast food burger.   There's the convenience factor with fast food, work, busy schedule, time constraints, driving distance, drive thru accessible, etc.  In my experience and in talking food with a lot of folks, some people for whatever reason just habitually eat at the same fast food places, not necessarily getting the best fast food burger.  Perhaps the price is right and/or it's close to work/home, but it's not the best of it's kind available. So is that really a robust fast food burger experience?  Nope. Checking out fast food options serves as a baseline if you will.  It's food information, a demonstration in how other places like a local fast casual or bar might be so much tastier and really not that much more expensive.  It's good to know info!   You'll see it all laid out in the final report.  It's going to be interesting to see how fast food ranks when directly competing against fast casual, diner, dive, bar & grill.  And here's kind of a 'tell' for why fast food is included in this challenge and shouldn't be dismissed... When is the last time you had a burger from A&W?  They're pretty good if you didn't know and their ranking might surprise you. 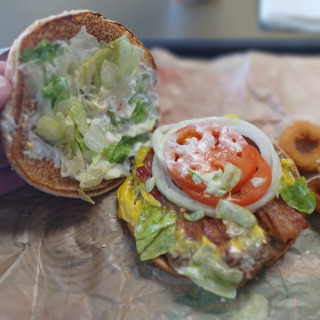 The under the lid reveal

For my Burger Challenge lunch this date, I ordered a Whopper with cheese and bacon combo meal to include onion rings and a soda.  I've never actually had a Whopper w/cheese with bacon on it before, so I was a bit intrigued to see if the bacon would elevate the sandwich.  It did a bit, but not enough to convince me it's any better than the next burger joint.  I will say this particular BK did a fair job of assembling this burger, there wasn't sloppy prep that you typically see with fast food.  The classic BK Flame Broiled char marks were there, the sesame seed bun had a nice toast, the veggies were fresh and the condiments were generously applied, BK doesn't hold back on that and their creamy mayo I think is what helps give the Whopper its distinctive flavor.  It's a good, but not great burger.

Even BK understands NOT to put the bacon on the patty in a 'X'. It's applied side by side for better coverage and bacon in every bite.

Side Note:  The Burger King onion rings are average at best, but I opted for them over BK fries, which I'm not a big fan of.  I had initially requested cheesy tots as my side, but cheesy tots are apparently not an option in combo meals.

Costing me $13.42 for the combo meal, the Burger King Whopper with cheese and bacon scored 50 out of a possible 63 points earning it 4 out of 5 Bachelor on the Cheap stars.  But look at that price!  That's on the high end of fast food prices, an example of why folks should consider a local fast casual or bar/grill to have a much better burger for about the same price!   A Whopper is a repeat buy but ONLY if you're on time constraints and BK is your closest option, or maybe a Plan B alternative when on the road traveling and you don't want to take the time for a sit down restaurant.  Let's face it, BK  is an "Eh" burger experience.  It's far from the best, but also not the worst option out there. 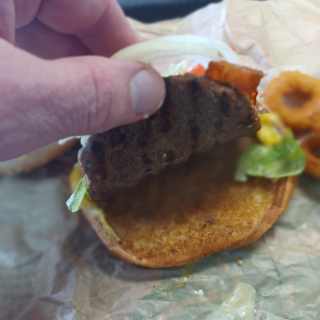 The classic BK Flame Broiled char, not bad for a frozen patty.

The Burger King visited on this occasion is located at 2111 N Woodlawn St, Wichita, KS 67208.  The service as polite but obligatory, I received my meal in about five minutes and the self serve drink machine (one of those touch screen Coke models) was out of ice.  The restaurant was clean and presentable, which is kind of a hit and miss thing when it comes to BK restaurants.  It's all in how well they're managed.