Best in Wichita Metro Burger Challenge 2022: How does Braum's rate? 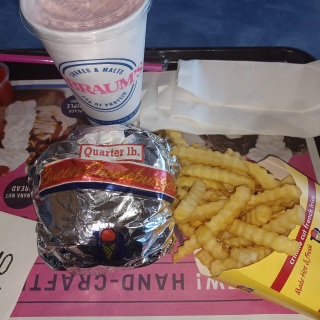 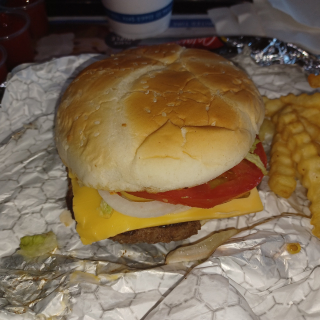 Decent initial appearance, but then there's the cheese...

Braum's is the 16th place visited on this 72 restaurant stop tour and it has been awhile since I've had one of their burgers.  I ordered their #5, a combo meal featuring a 1/4 pound bacon cheeseburger, fries and a drink.  Changing things up a bit in the drink department, I went with a strawberry shake.  The place wasn't all that busy so it was easy to find a spot to sit.

Here's the burger description from the Braum's website:  Braum’s Bacon Cheeseburger starts with a 100% pure beef patty. Then, we pile on hickory smoked bacon and cheese. We add fresh lettuce, tomato, pickle, onion, Braum’s sauce and mayo. It’s all served on a sesame seed bun freshly baked in Braum’s bakery! 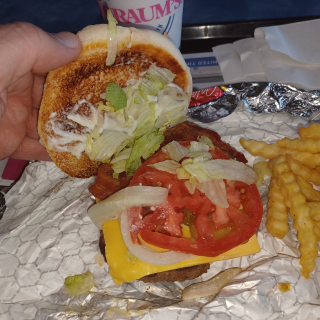 Juicy red tomato, nice toast on the bun... but check out the lack of melt on the cheese...  Hmm...

After about 10 minute wait, my order number was called and I went up to the counter to pick up my tray.  There was no strawberry shake to be seen, they hadn't even started to prepare it yet...   The manager noticed and confirmed with me, she then quickly made one up and set it on the tray.

The burger had a decent visual appeal in the unwrapping, but the cheese wasn't melted because the burger patty obviously wasn't fresh off the flat top.  Obviously, the cheese wasn't applied to the beef while still being cooked and some places don't do that, they place the cheese on during assembly of the sandwich.  I don't have a big problem with that IF the burger has just been removed from the grill, is steaming hot for assembly, slap on the cheese, the residual heat will provide a decent melt to it.  But that wasn't the case here.  And during the under the lid reveal, a minor adjustment to the bacon was needed to ensure I got bacon in every bite.  Some of the fundamentals were hit, the patty had a decent sear and was seasoned well, the veggies were on point and the bun had a nice toast.  The flavor was there, but I was served a luke warm burger. 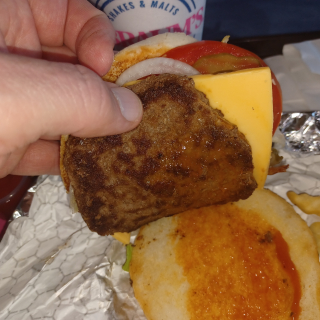 A good but not great sear on the patty, which by the way isn't too hot to touch... Note the firm corners on the cheese...

Side Note:  Braum's crinkle cuts fries are unremarkable.  I already knew this going in, I've never been a fan of Braum's fries but since there are no tater tot or onion ring alternatives, fries it was in keeping with the parameters of this Challenge.  Braum's doesn't fry their fries quite long enough for that ultimate crispy outer potato edge and they're always under seasoned.  Adding to the lackluster taste, they didn't come just out of the fryer hot, they were warm, but I have the feeling they sat on my tray for awhile waiting for the burger and shake to find their way over.

Costing me a bit over $8, the Braum's Bacon Cheeseburger scored 51 out of a possible 63 points, earning it 4 out of 5 Bachelor on the Cheap stars.  Overall a good burger, but there were a few fundamental misses preventing it from being a better burger such as a better sear, melted cheese and a little more care in timely assembly.  For the price, it's a repeat buy, the fries, not so much... 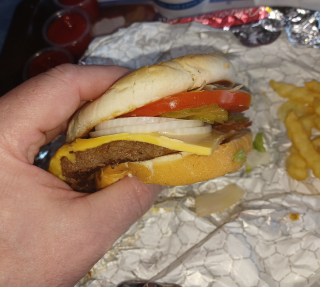 Did I mention the lack of melt on the cheese?

The Braum's visited on this occasion is located at 1261 S Rock Rd, Wichita, KS 67207.  The service was cordial enough yet typical fast food obligatory and there was an apparent lack of communication when it came to preparing my order.