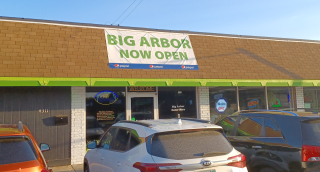 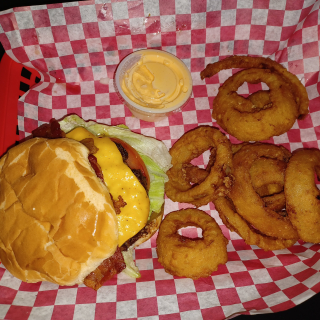 So it was Date Night Burger Night this evening and I met up with Vicki S at Big Arbor at about 6:30pm.  Vicki helped me put the list of burger joints together for this challenge and Big Arbor was one of her suggestions.  This is a new establishment, opening up in the spring, taking over the space vacated by the nightclub Tarragon's.

With a variety of burgers dominating their menu, I would be remiss if I didn't mention a boast from the Big Arbor Facebook page when checking them out online:  "The burger Wichita deserves. We hand grind beautiful marbled chuck steak."  OK, the expectation has been set and Vicki and I were here on the right night too, it's half price burgers all day on Wednesdays and live music! 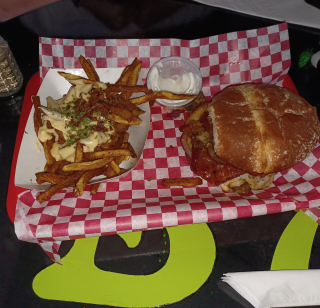 Giving us time to check out the menu, our waitress Tiffani grabbed us a couple of beers.  When we were ready, Tiffani took our burger order.  In keeping with the challenge, I ordered their Classic Cheeseburger with bacon, Vicki went with the Black Pepper Sauce Bacon Cheeseburger.  Time went by quickly with good conversation, cold beer and some decent music filling the air, some blues, Elton John, Billy Joel.  The music wasn't too loud either, Vicki and I could still carry on a conversation without having to shout.  I HATE it when music overpowers conversation in a small venue, but I digress...  Our burgers soon arrived. 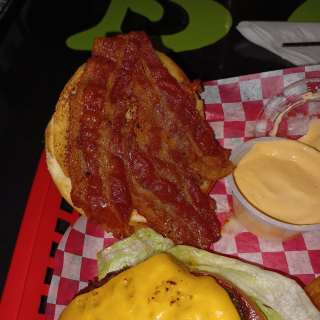 Now THAT's how you prepare and apply bacon to a burger! The nicely melted cheese however, is hiding an overdone burger patty.

The visual was nice, both burger baskets looked good.  While I was busy taking pics, Vicki was able to sample the burger goodness.  Her burger had a nice flat top crust and the bacon was crisp.  Sadly, the patty was under seasoned and the Black Pepper Sauce wasn't as robust as she had hoped. The artisan bun was a nice touch.

I had high hopes for my burger based on initial appearance and how the bacon was prepared.  In taking my first bite, it was tasty but I took a bite from an edge of the burger that wasn't so overcooked.  I noticed when taking pics, one side of the patty sat on the flat top too long.  The crust was approaching burnt status.  Unlike Vicki's burger, mine was seasoned well.  The bacon was perfectly prepared, the nice triangular shape for good bacon in every bite coverage and it was hit with a bit of black pepper.  In taking another few bites however, I got more of that over-cooked, over-crusty parts of the burger and the beef was dry.  Saving this burger, were the toppings.  Juicy tomato, fresh, crisp lettuce, the bite of the onion complimented by the tartness in the pickles and mustard.  The bun was toasted well, but it didn't hold up, it started to fall apart towards the end of the burger experience. 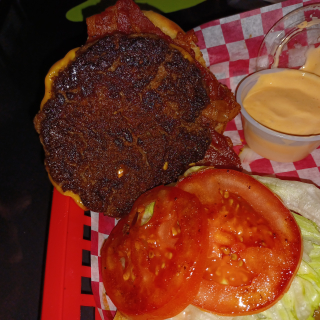 The patty was seasoned well, but over cooked, resulting in a dry piece of meat

Side Note:  My onion rings were tasty!  A generous portion, they were crunchy on the outside with that sweet onion bite on the inside that you are looking for and the dipping sauce was a nice compliment.  Vicki got the loaded fries, I wish I would have too!  That cheese sauce was so good and combined with the bacon bits and sour cream, YUM!

I can only score my burger which tallied 54 points of a possible 63, earning it 4 out of 5 Bachelor on the Cheap stars.  Had I been served a properly prepared patty, this burger would be a 5 star rated burger.  Too bad a do-over isn't possible, I chalk up the score with execution error in mind.  But with the burgers at half price, $6 and $5 respectively, they were Bachelor on the Cheap wallet friendly and both deemed repeat buys despite the over cooking on mine and the under seasoned issue with Vicki's.   Wednesday night burger night at Big Arbor is worth your time. 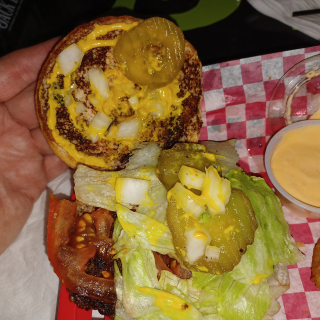 The saving grace for this burger, good toppings, nice coverage.

Located at 4311 W Central Ave, Wichita, KS 67212, the service at Big Arbor Restaurant & Venue was good but not great, but to be fair only two ladies were working the entire floor, plus the bar and a steady stream of customers.  The beer was cold, the music was enjoyable and the burgers were good.