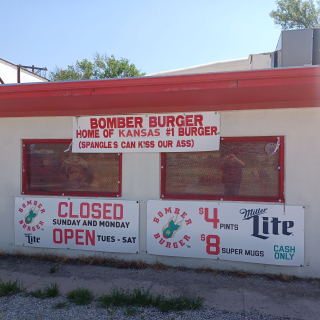 Today's challenge destination took me to Bomber Burger in south Wichita for lunch.   What used to be a bar that made a decent burger back in the day, is now considered by many to be a premier burger joint where you can get an ice cold beer.  A cash only business, "Cash Only" is posted on the door, on the website, it's posted inside, you can't miss it (more on this later)!  Bomber Burger is a dive with a burger cult following and it's no wonder - the hand formed Kansas Angus beef patties weigh in at a hefty 3/4 pound each.  That means if you order a double that's 1.5 pounds of meat for those of you who live in Haysville. 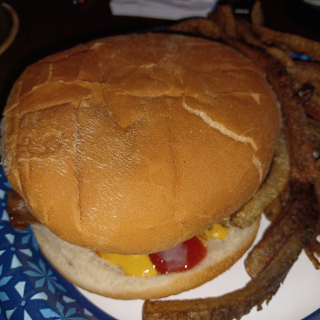 Biggest burger patty of the challenge

I walked in at around 11am and it was already busy.  The place opens at 10 and the seating at the bar was nearly full but I found one of the few remaining stools and parked it.  With spatula in hand, Burger Master Chris was busy flipping those huge 3/4 pound patties, it was a full flat top, the aromas of seasoned beef and bacon filled the room.   Chris took my order and poured me a mug of beer.  He's a salty guy and quite entertaining.  A couple of guys came in shortly after I did wanting to know if the "Cash Only" policy  was "negotiable"...  Chris responded with and I'm paraphrasing, "The sign doesn't say, "Cash Sometimes", it's not "Cash Once in Awhile", or "When the moon is blue"...  And yes, he was doing air quotes.  The guys were like, "Really, cash only?"...  Then mumbled something about not being able to barter for a burger and walked out.  Chris had the burger crowd laughing.  With a number of call-in and carry-out orders continuing to come in, I realized there is a reason the beer mugs are so large...  At one point he told some new customers that unless they had already called in their orders, it was a 45 minute wait. 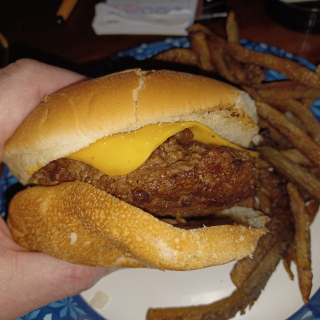 Presented simply on a paper plate, the burger and fry side take up all available space.  It's a beast dressed with ketchup, mustard, onion and pickle.  In taking that first bite the beef was seasoned well and juicy with a decent but not great flat top crust.  To be fair, Chris had a lot going on, with so many orders coming in and so many burgers on, that makes it tougher to get a really good sear and a nice outer crust.  That flat top (and Chris) were getting a good work out.  The bacon was crisp and overall a it was a good burger bite with each mouthful but I have to say that without a toast, the bun started falling apart halfway through. Requesting mayo (an option on the menu) would have helped prevent some of that.

Side Note:  The fries were generous in portion, but needed some jalapeno seasoning (available at the bar) sprinkled on them to flavor them up a bit.  That was a tip given to me by a regular, sitting next to me at the bar.

Costing me $12 for the burger and fries, a total of $20 with the big ass mug of beer, the Bomber Burger Bacon Cheeseburger scored 54 points out of a possible 63, earning it 4 out of 5 Bachelor on the Cheap stars.  Overall I enjoyed the ginormous burger, but it didn't quite hit expectation.  Had I shown up earlier and the place wasn't nearly so busy, I think I would have gotten a better burger.

Located at 4860 S Clifton Ave, Wichita, KS 67216, the Bomber burgers are HUGE, the beer is indeed ice cold and Chris is a pleasure to watch work.  The prices are Bachelor on the Cheap wallet friendly too, that's A LOT of burger for the buck!