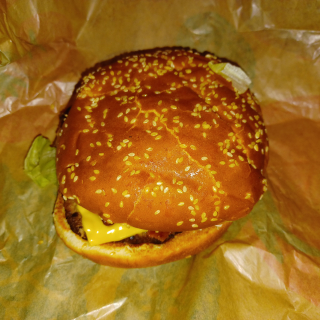 BK recently did a promo they referred to as a "Whopper Melt" but it wasn't a full size Whopper, it was a Whopper Jr.  BK took some flak for that to include negative feedback from yours truly.

This new limited time offering putting avocado spread and tortilla strips on a full size Whopper is appealing to me and of course, everything is better with bacon. 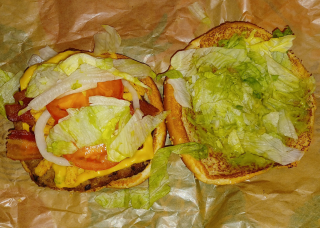 The under the lid look, nicely prepped for fast food, not sloppy and not skimpy on portion

It comes in an Impossible version too...  Seriously?  Why is this even an option?  The sandwich has BACON on it for crying out loud!  What's the point of having a fake meat patty on your sandwich if you're going to top it with bacon?  Yes I know, meatless fans can omit the bacon on their order.  I'm not a fan of the fake meat hockey puck, so I wasn't even tempted to order an Impossible version to compare it to the real deal.  Been there, done that with the original. 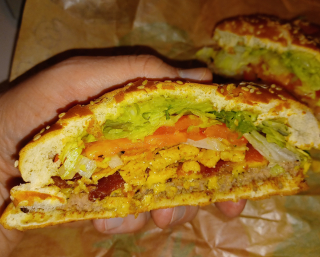 Nice combination of flavors, good crunch from the Tortilla strips

This is a limited time Whopper promo worth trying.  A nice change-of-pace from the regular Whopper, the combination of flavors and textures makes for an enjoyable fast food burger-for-lunch experience.  I got a generous amount of toppings, the produce was fresh, the cheese was melted nicely, the bacon and those tortilla strips (they're more like bits, rather than strips) provided a really nice savory crunch and putting this burger into the "Yes, I would order it again" category was the avocado spread.  Not that this is a spectacular spread, but it does do the job of bringing avocado flavor to the sandwich which is what got me interested in this Whopper to begin with.  Burger King has done a good job putting this sandwich together, a really nice combination of flavors.

Costing me $7.73 for just the sandwich, I'm giving the Burger King Southwest Bacon Whopper 4 out of 5 Bachelor on the Cheap stars.  With the avocado and tortilla chips delivering some nice flavor flare, it's worthy of a repeat buy.  But remember, it's only available for a limited time.  Thankfully this BK Whopper promo actually involves a Whopper, and isn't a Jr. size sandwich.

The Burger King visited on this occasion is located at 4220 E Harry St, Wichita, KS 67218.  They recently updated their parking lot with a new asphalt surface and a wide lane drive thru service to include a modern two-lane menu/ordering board area to improve traffic flow which is nice.  And while the attendant taking my order was polite, he didn't seem to know about the new Southwest Bacon Whopper, he had to ask somebody about it, then I had to repeat my order and that I wanted the sandwich only - again.  I'm cutting the guy some slack, maybe he's new or something, but when the customer says "Just the sandwich" twice, don't then ask them if they want the meal...  I arrived at the drive thru at 10:50am with no other vehicles in line.  I received my order at 10:56am.

I can't have beef anymore, that's why they have an impossible variation. They didn't have to make it for you, I'm happy they're considering everyone, even if their key demographic for it would probably say no bacon.

Hi I Just Got The New West Double Combo ,And I Was Very Disappointed
It Was Almost 13.00 Could Taste The Tortilla, The Spice Sauce ,The Tomatoes Horrible, Lettuces Bad.
Want Order Another One.

Thanks for reading Cindy! I would recommend trying one at a different BK location. Unfortunately, inherent in fast food is the inconsistent preparation of items. One location gets it right (properly managed), a different location doesn't care to.

Total waste of money. Almost $9 for a cold limp sandwich. Bacon was not crisp and no tortilla strips. Nothing like advertised
Total disappointment