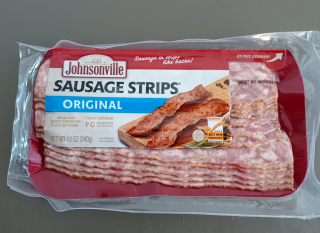 So I was at my neighborhood grocery store yesterday shopping for some essentials, eggs, milk, lunch meat and more when a package of Johnsonville Sausage Strips suddenly jumped in my cart!

I like Johnsonville brats and I'm a fan of Johnsonville sausage, it's a go-to for me when I don't have any sausage from my local butcher on hand.  I've been wanting to try the sausage strips since Johnsonville first introduced them on a limited basis in the Midwest back in 2020.  The product went national last summer hitting stores like Kroger (Dillon's in my neck of the woods), Walmart, Meijer, Albertsons-Safeway and Food Lion.  The strips are available in four flavor varieties: Original, Chorizo, Maple and Spicy. 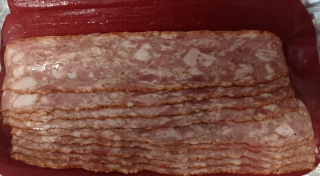 It's not as sexy as bacon

For breakfast this morning, I put three strips of the Original flavor in a frying pan, the traditional way to cook bacon.  After all, the package reads, "Sausage in strips, just like bacon!"  The strips - and why Johnsonville persists with the "strips" description and can't say, "Slices" I don't know, must be a marketing thing, but I digress - pulled away from the package easily and is equally finger greasy as bacon.  The meat kind of has a scrapple look to it, it's not as sexy as bacon, but it fries up just fine.  It cooks up in about the same time frame as bacon and it's actually lower maintenance, more forgiving than bacon which can easily burn on you if you're not watching and it doesn't 'bubble up' when it's cooked through like bacon does, it's sausage after all...  Browned on both sides, I plated the sausage strips along with two eggs over easy and a small side of hash browns. 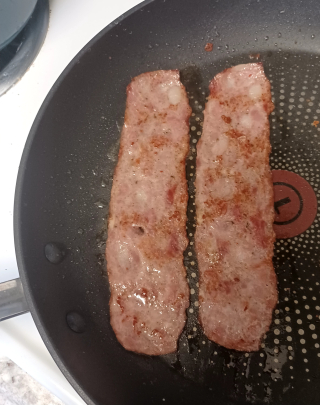 I took that first bite and chewed in disappointment.  Sure, I got the sausage flavor, but the texture isn't crisp, it's a chew, like in a turkey bacon kind of way...  I HATE turkey bacon... then I got hit with a salt bomb!  Two slices of classic cut bacon contain 274mg of sodium, or 12% of the recommended daily intake.  Two slices of the Johnsonville Sausage Strips contain a whopping 530mg of sodium, or 23% of the recommended daily intake!  The strips are also greasy to the touch, you cannot eat a slice of this stuff like you can a traditional slice of bacon, a wipe with a napkin is necessary after each bite.

Not liking how this stuff eats in the classic strip of bacon kind of way - it's not finger food friendly - I decided to try some in breakfast sandwich form.  I did two strips of the Johnsonville Original on a biscuit, with an over hard egg and a slice of American cheese.  The sausage was better prepared this way and the salt bomb factor was negated by the biscuit, egg and cheese.  The texture of the sausage though was still turkey bacon-ish - chewy, rather than crisp. If I'm going to put sausage in a breakfast sandwich, I want it in patty form.  The strips just don't cut it. 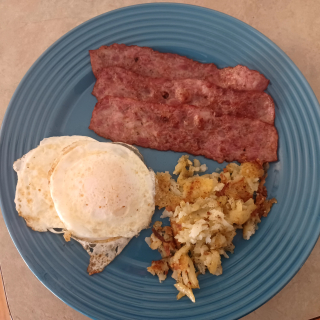 Johnsonville encourages you to treat their strips like bacon, so how does it compare?

Costing me $4.49 after using my Dillon's card, I'm giving the Johnsonville Sausage Strips 2 out of 5 Bachelor on the Cheap stars.  Johnsonville markets this stuff as an alternative to bacon, but it just doesn't compare.  It's not smoky like bacon, it's not crispy like bacon and it's a salt bomb.  I don't want to put a couple strips of this sausage on a burger, I don't want to break any strips up into bits to garnish a salad or to dress deviled eggs.  While reasonably priced, Johnsonville Sausage Strips are not a repeat buy and I'm not interested in trying the other flavors.  The texture isn't right and the salt is too much. 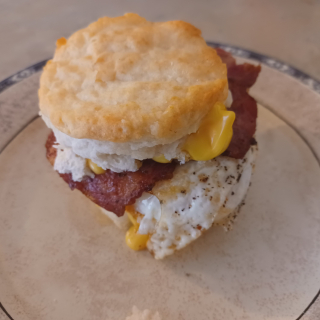 It's better served in a breakfast sandwich, but I'd rather have a patty of sausage

The Johnsonville Sausage Strips don't reheat well in the microwave either, they get rubbery.