How does Arby's stack up in the Fish Sandwich Challenge? 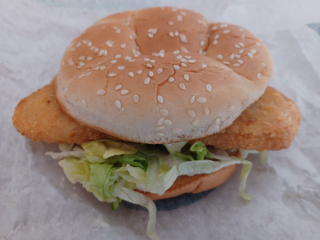 Eating fish sandwiches on a daily basis for lunch and dinner...  You know I'm doing this Challenge in the name of 'Food Science' (cough), right?  I'm eating through the bad and average sandwiches so you don't have to...

In 2018 I reviewed the fish sandwiches from national fast food chains but I figured it's time for a fish sandwich update.  I'll be reviewing all those restaurants again, as there's been some changes, some 'new and improved' sandwiches as well as new offerings.  But for this 2022 review, along with the fast food joints I'll be including fast casual chains as well as the local restaurants, making it a "Who makes the best fish sandwich in Wichita?" Challenge!

Their Crispy Fish Sandwich is the same as it was back in 2018 and is a classically prepared Alaskan Pollock fillet crispy-fried to a nice golden brown, topped with tartar sauce, shredded lettuce and served on a sesame seed bun.  It has a nice initial visual appeal and my first bite was crunchy, the fillet was seasoned well and overall there was a nice balance of fish, tartar and lettuce.  The fish to bun ratio was good but I do have to say that as I worked my way towards the middle of the fillet, the crunch was missing.  Too bad there isn't a fish sandwich war going on, because while this is a good fish sandwich, it's not great and I'm a little disappointed no effort has been made to improve on this sandwich.  It scored 49 points out of a possible 63. 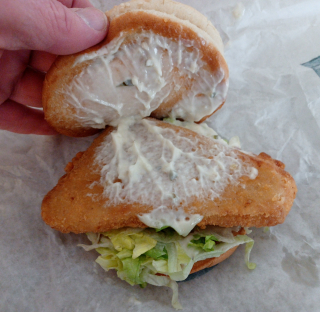 Plenty of creamy tartar, but it should be on the bottom bun underneath the lettuce, this is what made the breading on the fish go soft in the middle. How a sandwich is layered, matters.

But I did say Arby's has more than one fish sandwich choice on their menu and I bought those as well to sample (by the way, there is no good way to reheat leftover fish sandwiches).  They also have what they call a King's Hawaiian Fish Deluxe which has the same Alaskan Pollock fillet as their Crispy Fish Sandwich but includes tomato slices, a slice of cheese and is served on a King's Hawaiian bun.  This too is a good sandwich, but not great.  It suffers from the same problem, the fish fillet is only crisp around the edges, the breading goes soft in the middle of the sandwich.  The tomato slices are a refreshing add, the cheese I could do without and you do get some sweetness in that King's Hawaiian bun.  Again, a good but not a great fish sandwich, it scored 48 points out of 63.  Blame it on the unnecessary cheese for scoring below the entry level Crispy Fish.

The Spicy Fish Sandwich is less-than-stellar.  I like some heat and don't back away from it, but this fish sandwich needs to go back to the drawing board.  Here's the description from the Arby's website:  A spicy seasoned crispy fish fillet topped with diced fire-roasted jalapenos, shredded lettuce, tomato, and tartar sauce on a toasted sesame bun.  This sandwich isn't 'spicy seasoned', that implies there's some spicy seasoning in the breading, as in part of the breading, before the fillet gets fried (which is what the Nashville Hot was back in 2018).  That makes for a complimentary spice to the fish fillet.  But in this 2022 'spicy' version Arby's just throws hot sauce on top of a regular fillet and tops it with the diced jalapeno.  Arby's has gotten lazy with topical ingredients and what that does is overpower the fish, the creamy tartar and toasted bun, it doesn't complement it.  There's no blending of flavors, no balance, your bite engages heat, there's no chance to celebrate the other flavors.  It was jalapeno and hot sauce overkill.  A better approach would be to mix the diced jalapeno in WITH the tartar sauce...  jus' say'n.

So Arby's, instead of focusing on making one, really good sandwich, gives us three mediocre sandwiches.

Overall I'll give Arby's 4 out of 5 Bachelor on the Cheap stars.

The cheese doesn't do anything for this sandwich

The under the lid look of the Spicy Fish Sandwich. The topical application of heat overpowers everything else, there's no balance

Related, posted in 2018: Who has the best fast food fish sandwich? They are listed here from worst to first

Related: A "Who makes the best fish sandwich in Wichita?" Challenge - Day 1 Lunch: Sonic (Sonic was not reviewed in 2018)

Related: A "Who makes the best fish sandwich in Wichita?" Challenge - Day 3 Dinner: Fish and More

Related: How does Hardee's stack up in the Fish Sandwich Challenge?

The Arby's visited on this occasion is located at 4308 E Harry St, Wichita, KS 67218.  With just one car ahead of me at about 11am on a weekday, the service was polite, friendly.  After paying at the window, I did have to pull forward and wait a bit to give the fish some frying time.  I was able to listen to a couple classic rock songs on 104.5, The Fox, to include an ad promo for an upcoming ZZ TOP concert!