BOTC Home About BOTC Contact BOTC List Your Business Search Directory Archives Weather Grilling Good Eats Jobs Donate
Huddle House makes a burger worthy of a repeat buy
Instacart is only as good as the shopper that's shopping for 'you'... 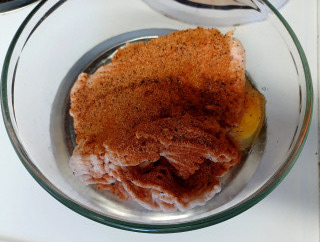 I love Chicken Cordon Bleu, it's a classic French dish of chicken that is pounded out thin, which is then wrapped around ham and Swiss cheese.  The whole thing is then breaded and fried or baked until golden, brown and delicious.

Chicken Cordon Bleu packs SO much flavor and why it's so high on my list of all time favorite eats, but it's also a labor intensive dish to make in the classic preparation.  It's not exactly a meal one can prepare in under 30 minutes. 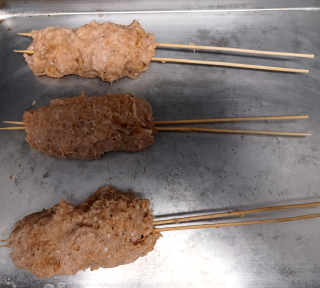 I also love just about anything grilled, so it hit me, why not try to incorporate Chicken Cordon Bleu flavors in a grilled preparation and to be specific, a meat on a stick preparation.  Who doesn't LOVE meat on a stick!?

So today, I'm developing a new recipe for Grilled Chicken Cordon Bleu on a Stick, which you get to witness at the experimental/entry level.

I'm going to use two pounds of ground chicken, mixed with a chicken rotisserie spice made by a local spice merchant and incorporate an egg to bind it with.  Ground chicken is lean, so some extra fat will be needed to help prevent dryness and any falling apart on the skewers.

For the ham and cheese portions, I'm going to do this three different ways to find out which works out best, evaluating ease of preparation and taste. 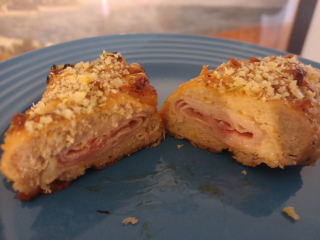 The deli sliced ham version turned out the best

Going in, I'm going to predict option 3 tastes the best.  But it will also need the most grilling time since it's not a pre-cooked ham product.

To make it as "Cordon Bleu" as possible, I'll be hitting the skewers with a garlic butter and bread crumb mixture just before pulling from the grill, letting the flame kiss the meat on a stick a little bit to crisp the topping.

In staying as classic as possible with the first preparation, the deli sliced ham was easy enough to wrap on the skewers, the Swiss cheese, not so much.  I was tempted to half the cheese slices and layer them, but I finally was able to get everything all under control and properly wrapped under the seasoned ground chicken layer on the skewer.  Once that was done, they went back in the fridge to chill.  Remember Grilling Tip #1 from Chapter 2:  Ground meats should be cold when putting on the grill. If they’re at room temperature, ground meats tend to fall apart or droop through the cooking grate.

In working with the second version, the diced ham and diced Swiss cheese, what I thought would be the easiest wrap and skewer was actually the most difficult.  I'll admit to putting too much ham and cheese on initially, but the dice of the ham was too large, it ended up poking through the ground chicken and maneuvering the plastic wrap in a sushi roll type preparation was a bit of a challenge.

The third version - using the ham loaf - was easy to put on skewers and I did slice the Swiss cheese into strips before wrapping things up with the ground chicken.  Points here for the easiest prep. 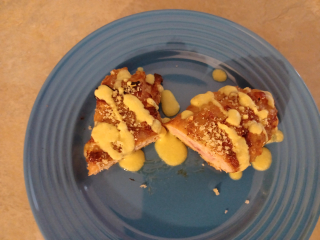 Sauced with a Dijon Cream

After getting some chill time in the fridge, it was time to grill.  I started things off by grilling versions 1 and 2 and the skewers over indirect heat, a reverse sear.  The ham in these versions is already cooked, so all I had to worry about was ensuring the ground chicken was cooked through, with the ham warmed through and the cheese melted.  Grill marks would come later when applying the garlic butter and bread crumb mixture over direct heat.  I kept the skewers away from the flame, turning a quarter turn about every 10 minutes.  Then using my handy dandy grill safe butter dish, brushed on some garlic butter and Italian seasoned Panko bread crumbs over the flame.  The ham loaf version needed a little more cooking time over indirect heat, to ensure the ham loaf on the interior was cooked through.

Developing this recipe was a lot of fun to prep, take notes, grill and eat!  My prediction however, that the ham loaf version would taste the best, was wrong.  It was second best.  The more classic preparation, using the sliced deli ham won the day in both flavor and presentation.  You get layers of flavor with the slices of ham and a different texture element along with the consistent and wrapped slice of melted Swiss cheese within.  The ham loaf version while tasty, lacked the texture element - all meats being ground - and the cheese flavor wasn't as robust using the Swiss in strips.  Coming in third out of three, the diced ham version.  Diced just doesn't measure up to sliced or loaf, in fact one of the diced skewers fell apart on the grill, there was too much moisture in the ham dice, it steamed the inside of this preparation resulting in flavors that just came out flat.

With the deli sliced ham version being the champ, I'll be posting the full recipe in the Poultry section of Grilling Good Eats, to include the Dijon Cream Sauce. 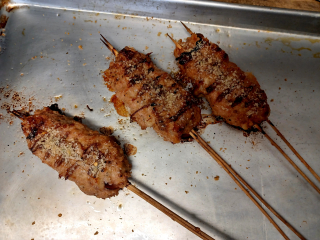 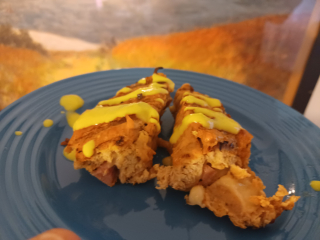 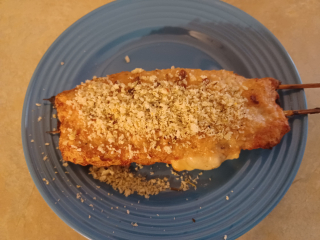 Ham loaf version ready for sauce, check out the cheese ozzing out the side...