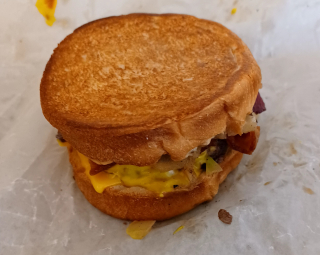 Nice toast on the toast

Innovating with their Whopper, Burger King does a play on the classic patty melt, with their new Whopper Melt featuring toasted bread layered with two Whopper Jr. patties for a total of 1/4 pound of beef, melted American cheese, caramelized onions and BK's signature "Stacker Sauce."

I'm a Patty Melt fan, so I've been wanting to try this new offering since it was released earlier this month.  For those of you who don't know what a classic Patty Melt is, it's a burger topped with grilled onions, a slice of melted Swiss cheese, served on grilled Rye Bread.  Variations include the use of American cheese instead of Swiss and Texas Toast replacing the Rye. 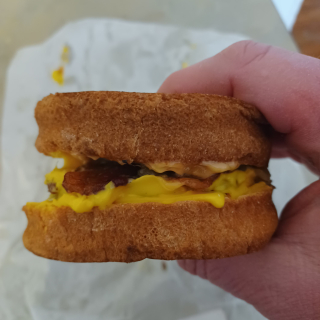 It's not a big sandwich, it should be called a Whopper Melt Jr. and not the best meat to bun ratio either...

Now when I hear "Whopper," I automatically think of BK's regular, Whopper sandwich and a full size quarter pound patty.  So when this new Whopper Melt with two patties was first announced, I was thinking this was going to be a GI-NORMOUS sandwich with not one, but TWO quarter pound Whopper patties!  Fantastic!  But no, in reading the menu description after that initial announcement WHOPPER MELT marketing hype, there it was in the small print...  Two Whopper Jr. Patties - 1/8 pound each - make up the sandwich.  Note however, the sandwich is NOT called a Whopper Melt Jr.  If you don't read the description before ordering one, you might come away disappointed.

Burger King gives you three Whopper Melt options, The original Whopper Melt as described above, along with a Bacon Whopper Melt and a Spicy Whopper Melt featuring jalapenos and a 'creamy spicy' sauce rather than the stacker sauce. 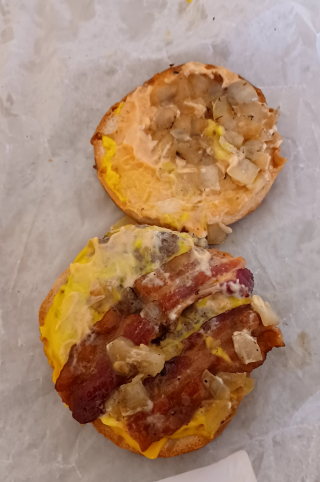 A look under the lid

Hitting my neighborhood BK drive through at about 11am, I ordered the Whopper Melt with bacon.  I could have gone with the original, but then again, everything is better with bacon.  I received my sandwich in a fair amount of time and the aroma emanating from the BK bag on the drive home was pretty intense.  Once home and after taking a few pics, I took that first bite...  The meat was prepared properly and delivered that classic BK grilled flavor, the toast was nicely toasted, the cheese was on point melted but the onions could have used a bit more cook time.  As far as the stacker sauce goes, too sweet! And so is the toast.  All that sweetness overpowers all the savory flavors in this sandwich.  I don't want a sweet burger experience, I want savory!  Even the savory bacon was overwhelmed by the sweetness of that toast and sauce, sweet toast and sauce flavors lingered on the tongue, NOT burger and onion!  I was looking forward to this sandwich, but came away disappointed.  Silver lining, I wasn't craving anything sweet for dessert!

Costing me $6.23 for just the sandwich, I'm giving the Burger King Bacon Whopper Melt 3 out of 5 Bachelor on the Cheap stars.  This really isn't a Whopper Melt without the classic quarter pound patty, it's a Whopper Melt Jr., shame on BK for the marketing ploy.  More importantly, the savory notes of grilled burger, bacon, onions and melted cheese are overpowered by a bread and sauce that are just too sweet.  This isn't a patty melt sandwich, this is a patty sweet sandwich, a junior one at that and it is NOT worthy of a repeat buy.  This is a limited time sandwich offer and that's a good thing.  I won't be sad to see this item dropped from the menu.

Whoever came up with this idea for Burger King should be Fired Immediately!!!
Me and a few co-workers were discussing the Whopper Melt at work today and we all agreed it looked very interesting to try. After work today, I was headed to my nearest Burger King to try it, but decided to check online for reviews.. Dam#$... so disappointing to read your review and find that this burger is really a junior Whopper melt
Thanks for the heads up and I will surely inform my friends not to bother with this burger!! :(

This is preference and opinion of course. I had the complete opposite response to trying this. The onions were perfect can’t have enough. The bread was not sweet at all, just regular thick toast. The stacker sauce is not that noticeable but just enough to add a bit of sweetness and moisture. A bun would probably not hold up well. This is an excellent burger and I hope it stays around.

Thanks for reading John, preparation makes all the difference, good sandwich prep is hit and miss in fast food. But make no mistake, there's sugar in that bread and if a bun was used, well, then it wouldn't be a Patty Melt. FYI, there are 11 grams of sugar in the BK Whopper Melt. Contrast that to 7 grams of sugar in their double cheeseburger.

"A disgustingly sweet product sandwiched between two, too thick, overly spongy slices of completely untoasted white bread" would be my review in brief.

They cant even get the onions right. Onions are supposed to be tangy, not taste like they had a half pound of sugar dumped on them while being prepared. Don't let that golden brown color on the bread fool you either, there is no crispness there.

I even tried ordering this sandwich again through the app (it was on discount for a good price) with completely revised custom toppings. Basically I did it up like a traditional Whopper with bacon. I still couldnt hang with that bread.