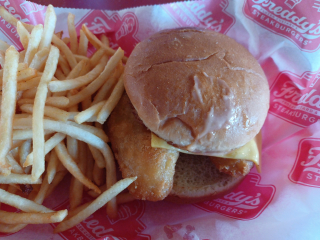 It's a good looking basket

Today I reviewed Freddy's Frozen Custard & Steakburgers and their Fish Sandwich, which scored 4 out of 5 stars in 2018.

Advertised as two fillets of premium wild-caught Alaska cod, the Freddy's Fish Sandwich is topped with a slice of American cheese and the toasted bun is dressed with Thousand Island dressing.  That's a change in the description from 2018.  The fillets were crispy with each bite and the fish to bun ratio was good.  But the texture of the fish was a bit mushy rather than flaky.  The sandwich just wasn't as good as I remember from 2018 which ranked as the 3rd best fast food fish sandwich in that Challenge. 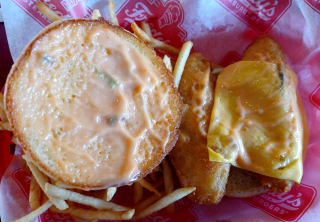 Thousand Island Dressing, but no Freddy's Seasoning and lacking a pickle juice kick

Scoring 46 points out of a possible 63 and Costing $7.69 for a combo meal with Freddy's famous shoe string fries and a drink, I'm giving Freddy's Fish Sandwich 3 out of 5 Bachelor on the Cheap stars, a downgrade from the 2018 Challenge.   With the dressing on the sandwich not being as robust as it once was and the fillets being a bit mushy, the sandwich is a very borderline repeat buy, as in, if I happen to be at Freddy's on a Friday.

I only reviewed national fast food chains last time around and I'll be reviewing all those restaurants again.  But for this 2022 review, along with the fast food joints I'll be including fast casual chains as well as the local restaurants, making it a "Who makes the best fish sandwich in Wichita?" Challenge!

Related, posted in 2018: Who has the best fast food fish sandwich? They are listed here from worst to first

Related: A "Who makes the best fish sandwich in Wichita?" Challenge - Day 1 Lunch: Sonic (Sonic was not reviewed in 2018)

The Freddy's visited on this occasion is located at:  11525 E 13th St N, Wichita, KS 67206.  Dropping in for an early lunch, my girlfriend and I were greeted warmly as we walked in and our order was taken right away.  Service was fast, friendly and we received our meals within 5 minutes.