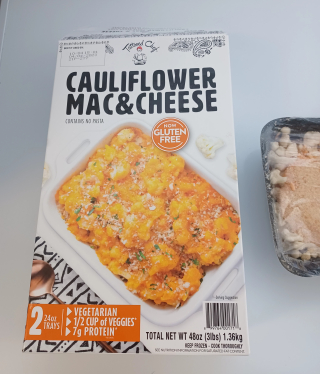 Always looking for ways to minimize my carb intake while also trying to maintain some variety in my daily diet, I came across this "Cauliflower Mac & Cheese" dish made by the Tattooed Chef in Sam's Club last week.

The packaging is quite appealing, I mean, who doesn't like Mac & Cheese, right?!  And with 7 grams of protein and just 10 carbs, plus being gluten free, this stuff would seem to be almost a guilt free cheesy pleasure.

My expectations going in were high, I'm thinking, "What was Tattooed Chef able to do with the cauliflower to make it come off as pasta and legitimize calling it a Mac & Cheese?" 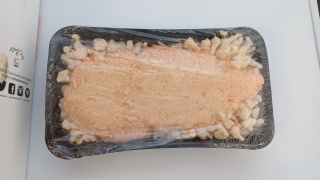 How does this transform into looking like the packaging pic? It doesn't.

Epic Fail:  Tattooed Chef has no business calling this a "Mac & Cheese."  This is nothing more than cauliflower with cheese, bread crumbs and a bit of seasoning.  The "Mac & Cheese" label is pure marketing, nothing but and it worked, because I bought a package thinking I would be getting something more than just a run-of-the-mill cheesy cauliflower side dish.  Instead of putting "Contains no pasta" in smaller print on the packaging, Tattooed Chef should put, "NOT a Mac & Cheese substitute" on the box.  "Mac & Cheese" in the big, black lettering should be stricken from the box. This dish smells of cauliflower, the texture of the cauliflower was not transformed to resemble pasta in any way, the taste is cauliflower.  The cheddar cheese was unremarkable, not mixed throughout the dish and there wasn't enough of it.  There was a tease of cheese, but it was NOT a "Mac & Cheese" amount of cheese.  The panko bread crumbs did not turn golden brown/crisp up in the oven in following the package instructions and overall, the dish is under seasoned.  I had to doctor this thing up with bacon bits, Parmesan cheese and additional seasoning to make it more palatable.

Costing me about $11 at Sam's Club, I'm giving Tattooed Chef Cauliflower Mac & Cheese just 2 out of 5 Bachelor on the Cheap stars.  I like cauliflower, but to label this dish as "Mac & Cheese" is quite a stretch and this product is NOT a repeat buy.  What Tattooed Chef has put out there is nothing more than a run-of-the-mill cheesy cauliflower side dish with a lame bread crumb topping.  My $11 is better spent on something else with more flavor.