Subway is generous with the Baja Chipotle sauce, but it doesn't make up for the dry, under seasoned chicken

After a long hiatus from eating at Subway because they flat out aren't the best sub shop out there, I recently went in to try a sandwich from their new and supposedly revamped menu which they've been marketing as "Eat Fresh, Refresh."

On that visit I sampled the Baja Steak & Jack sandwich and I was pleasantly surprised by how good it was.  Not only were the flavors there and more exciting than the old menu options, the sandwich prep itself was better than what I experienced in the past.  Those factors contributed to Subway's decline as the sandwich king in recent years, a ho-hum menu with average ingredients and food prep that was sloppy.  But they seem to have stepped up their game.

So in enjoying that Baja Steak & Jack, today I decided to give the the Baja Chicken & Bacon Sub a try.

I ordered a foot long on the Italian Artisan bread, toasted, and I had it topped with lettuce and tomato, the suggested adds from the menu board. 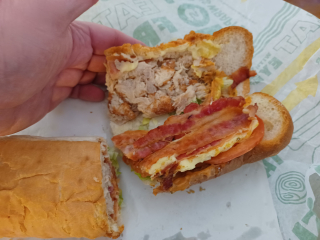 Uneven distribution of meat, some empty bread bites there at the heel

Subway hasn't completely kicked it's old bad habit of some sloppy food prep and not so great ingredients.  I'm a bit amazed at how there can be such a product quality gap and lack of attention to detail from different staff at the same shop.   The meat for my sandwich wasn't distributed evenly on the bread, it was just slapped on, the lettuce was looking a bit wilted and needed to be changed out and the tomatoes, half the slices had very green centers.  After doing some quality control on my own behalf because the staff wasn't, I paid for my to-go sandwich and chips.  Hey, if I'm going to pay $12 for a sandwich, I want fresh green lettuce and red tomatoes.  With the chips, the total price was over $14.  Subway has raised their prices in introducing their new menu and while I appreciate the new hickory smoked bacon and Baja Chipotle sauce as part of that price hike, I also expect better food prep and improved quality control with the other ingredients.

In taking the first bite of the Baja Chicken & Bacon sub, I was not as impressed as I was with the Baja Steak & Jack.  The rotisserie chicken was dry and under seasoned. I got crispy bacon in every chicken bite, kudos there, and the pepper jack cheese was nicely melted.  The toasting of the bread was good but had I not done some quality control on the veggies, I think I would have been rather disappointed in the quality of this sandwich.  As it was, the overall flavor is underwhelming.  I'm left wondering if it would have been the same employees that prepared my Baja Steak sandwich the other day, would my Baja Chicken have been a much better sandwich?

Costing me over $14 for a foot long sub and a bag of chips, I'm giving the Subway Baja Chicken & Bacon sub just 2 out of 5 Bachelor on the Cheap stars.  I paid too much money for an "Eat Fresh Refresh" sandwich.  It is NOT worthy of a repeat buy, well, not prepared by the same staff anyway...  That's a reflection on management and the inconsistency in food prep and ingredients.

Buy Me a Coffee