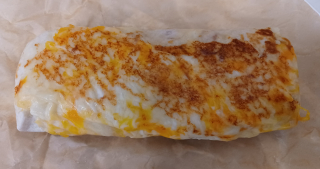 There's been a chicken sandwich war going on in fast food for a couple of years now.  But there's another war developing...  It's a toasted cheese war!  With the success Wendy's has enjoyed with their cheddar bun, Taco Bell is playing off that success by re-introducing its Grilled Cheese Burrito.

Wendy's kicked things up a notch in August and took a step ahead of the burger competition by introducing their Cheddar Bun, featured in a Bacon Cheddar Cheeseburger.  You can check out that review here.  The toasted cheese on the bun has been so popular, Wendy's now features the bun in select chicken sandwiches in addition to the burger option.  Consumers are loving that cheddar bun!

It looks like an ordinary burrito on the underside, but see those hints of cheesy deliciousness?

I liked the flavor the toasted cheese did for the Wendy's Bun, it wasn't picture perfect, but it was good.  Will Taco Bell's toasted cheese on bread also be good?

The answer is yes.

This thing is stuffed with cheesy goodness

The Grilled Cheese Burrito is cheese flavor on top of cheese flavor.  The burrito is thick, stuffed full of tasty ingredients, not skimpy on portion at all.  Every flavor in this thing combines into a wonderful bite, the cheeses, the seasoned rice, the sour cream, the red strips which despite all that cheese and warmth going on, still had some texture and crunch to them but I suspect they wouldn't have, had I had a longer drive home.  The only knock I've got on the burrito is that the seasoned beef got a bit lost in all that cheese.  I should have ordered extra.  I could say the beef to burrito ratio was a bit unbalanced, but then again, there's no such thing as too much cheese.

Costing me about $3, the Taco Bell Grilled Cheese Burrito is cheesy good, quite satisfying and very wallet friendly.  Enjoying the burrito for lunch, it will carry me to dinner.  I'm giving it 4 out of 5 Bachelor on the Cheap stars and it's definitely worthy of a repeat buy!  Cheese grilled into a tortilla is a very good thing.  Ordering options are available, such as steak, chicken and black bean.  I look forward to trying them all.

Who will be next to put toasted cheese on bread?  Burger King?  McDonald's?  Arby's?