Smart packaging, made for eating in the vehicle

I've never had a food item from Starbucks before.  I've enjoyed their coffee from time to time, but that's usually when somebody else is buying.  Don't get me wrong, it's good coffee, but it's expensive coffee.  Their food menu has never really intrigued me.  It's a coffee snob menu.

But being on-the-go again yesterday, I needed something on-the-fly and the Starbuck's drive through was a convenient stop for me.  I was going to order their Grilled Chicken & Hummus Protein Box but they were out, so as a plan B, I ordered the Ham & Swiss Panini.

Here's how Starbucks describes it:  Ham and Swiss cheese meld with Dijon butter in comforting warmth. An extraordinary feel-good taste. 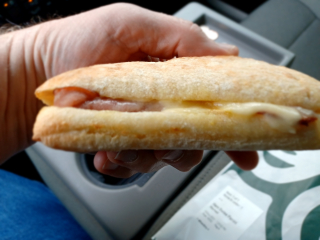 This isn't a true panini, because the sandwich isn't grilled or pressed.  But the roll was nicely toasted, it had a nice crispy outer edge and a warm, soft, chew on the inside.  The portion of ham was OK, but not heaping and it had good flavor.  The Swiss Cheese was melted nicely and bringing it all together was the Dijon mustard butter, this sandwich would be very ordinary without it.  Starbucks calls it "an extraordinary feel-good taste"...  not so much.  It's good, but not "extraordinary" good.  The best feature of this sandwich was the bread, but that's the problem, the meat/cheese to bread ratio isn't balanced, there's not enough meat & cheese to go with all that toasty bread. 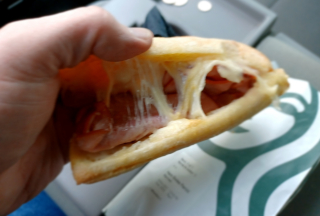 Good ham & cheese flavor, but not exactly a generous portion

Not a true panini and costing me about $7 , I'm giving the Starbucks Ham & Swiss Panini 3 out of 5 stars.  Overall it's a decent sandwich, but it's as overpriced as Starbucks coffee is and is not worthy of a repeat buy.  I'm still not impressed with the Starbucks food menu.  I'd rather spend my $7 on a better non-coffee snob sandwich somewhere else.

Related Story: Coffee Challenge: Who makes the best hazelnut coffee? Ranking them from worst to first

Gotta have mustard to squirt onto it with every bite. Spectacular.