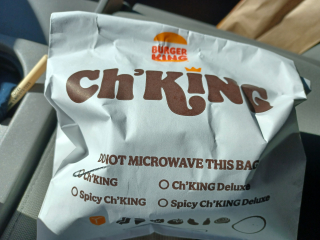 Back in June, I wrote about the Chicken Sandwich War going on in fast food and who makes the best chicken sandwich.

That sandwich war is still happening and Burger King has re-grouped on the battlefront with a new weapon.

Burger King kicks things up a notch with a bigger chicken breast filet, better breading, bread and butter pickles, a nice mayo - a blend of mayo and honey mustard - and all served up on a potato bun. 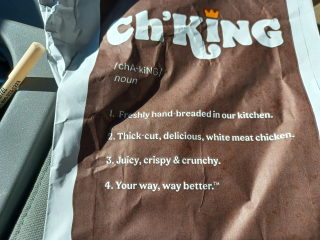 I reviewed what Burger King was serving up at the time back in June as part of the Chicken Sandwich War Challenge and I was NOT impressed.  The Burger King chicken sandwich was the second worst sandwich sampled.  But this sandwich?  MUCH IMPROVED!

Thank you for stepping up your game Burger King! 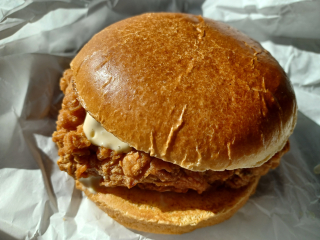 The chicken was fried to perfection, it was crispy, tender, juicy and the meat to bun ratio was SO MUCH BETTER than what BK used to serve up.  It still wasn't chicken extending beyond the borders of the bun like Popeye's, but still, MUCH improved over what BK has served in the past. All the flavors on this sandwich were on point, with the breading delivering a nice crunch, the pickles providing some twang, the mayo has been elevated as well and bringing it all together is that potato bun, light and fluffy with a complimentary chew.  The only real knock I have on this sandwich was that it was a bit under seasoned.  Overall, a pleasantly robust chicken sandwich. 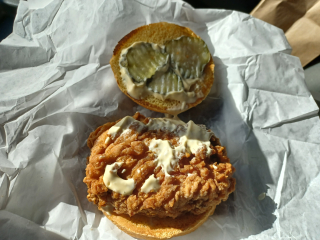 Costing me $5, I'm giving the Burger King Ch'King Sandwich 4 out of 5 Bachelor on the Cheap stars.  BK has 'upped' their game in this chicken sandwich war.  Their sandwich isn't as good as Popeye's, but it's a very respectable plan B and worthy of a repeat buy.