I saw the Applebee's commercial for the Cheetos Boneless Wings and said to myself, "Self, I have to try those!"   What's not to like?  Fried chicken and Cheetos in the breading?  It sounds like another dose of YUM!

Here's the marketing write-up on the Applebee's website: The Ultimate Collision of Flavor.  SAUCY BONELESS WINGS. CHEESY CHEETOS® GOODNESS.  Taking our Boneless Wings to the next level!  Introducing Cheetos® Boneless Wings, only at Applebee's! A tasty combination of our famous Boneless Wings and cheesy Cheetos®, they're available in both Cheetos® Original and Flamin' Hot®. Get ten saucy wings for only $9.99, and don't forget to try the Cheetos® Cheese Bites — they're available now for a limited time only. 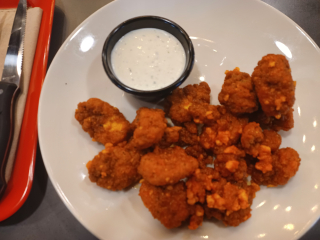 My plate was delivered within about 10 minutes, fast, fresh and hot!  But in looking at the plate and remembering the visual from the commercial on TV, I was more than a bit disappointed in the presentation.  This wasn't chicken completely covered in a generous dusting of Cheetos like in the marketing images, this was some rather roughly crushed up Cheetos randomly mixed in the regular Applebee's breading, almost like an afterthought...  as in...

Cook:  "Oh Shit, I almost forgot to toss in some Cheetos!"

The real product does NOT resemble the marketing picture....  It's not even close.  That's not a dusting of Cheetos blended in with and complimenting the Applebee's breading, that's a corn in your stool presentation.  I don't think the folks at Cheetos, or the upper management at Applebee's are going to be pleased with this pic.

So now that you have a corn in your stool visual in your head, "How does it taste?" you ask?...

Yes, in the name of food science, I proceeded to taste. 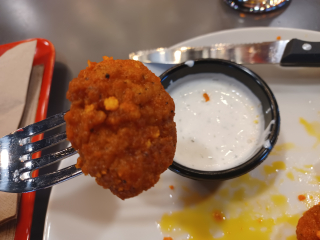 Occasional chunks of Cheetos, rather than a blended breading

Served with some Ranch dressing to dip in, these are good, but not great.  The chicken nuggets - let's be honest, that's really what they are - the chicken was juicy and tender, the breading itself was seasoned well, had an overall decent crunch and I got the Cheetos flavor in the nuggets where the Cheetos CHUNKS obviously stand out, but make no mistake, this is not at all the kind of bite the marketing hype lures in you in for.  What Applebee's served me amounts to some decent chicken nuggets with some occasional cheesy Cheetos flavor, but it comes up well short in delivering Cheetos flavor in every bite.  Another downer, look at the grease with the presentation, note the color.  That's Cheetos chunks yellow, the chunks - rather than an even breaded coating like in the marketing pic - absorbed the oil which made the Cheetos a bit heavy and soggy, rather then adding crispness to the chicken. Costing me $10 for 10 'wings', er NUGGETS, I'm giving Applebee's Original Cheetos Boneless Wings just 2 out of 5 Bachelor on the Cheap stars.  What I was served does NOT live up to the marketing hype and for $10 I expected to be wowed a bit with what is supposed to be an elevated dish.  This is NOT a repeat buy.