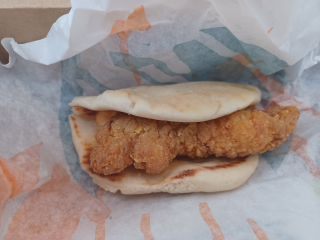 Back in June, I wrote about the Chicken Sandwich War going on in fast food and who makes the best chicken sandwich.

That sandwich war is still going on and Taco Bell has decided to enter the battlefield.

Being marketed as both a sandwich and a taco, Taco Bell sandwich war weapon consists of a piece of white-meat chicken that was marinated in jalapeño buttermilk and seasoned with bold Mexican spices, then rolled it in a crunchy, tortilla-chip coating to give it that crunch. Topped with creamy chipotle sauce and tucked into puffy flatbread shell, the Crispy Chicken Sandwich Taco appears to be a pretty good weapon.

On the small side, the portion of this 'sandwich' is more like a slider sized helping rather than a sandwich, a 'slider' taco...  'jus say'n.  But the flavor is there, crunchy, juicy chicken, it's seasoned well although the jalapeno flavor came up a bit short.  The creamy chipotle is on point and the puffy flatbread shell is a nice touch. 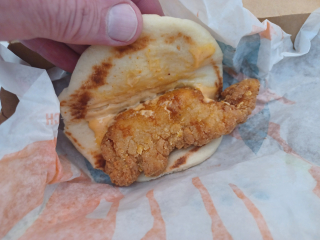 The flavors are good, but lacks a jalapeno bite