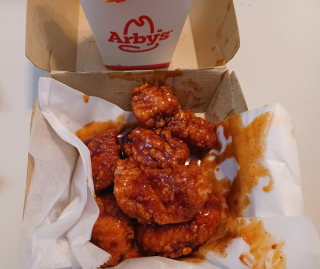 Like any other Red Blooded American Male, I am a HUGE fan of wings!  So when Arby's announced they were introducing boneless wings starting October 25th, I couldn't wait to order and bite!

Here's the description from the Arby's website:  Arby’s new Boneless Wings are made with 100 percent bite-sized pieces of all-white meat chicken breast battered up in a crispy, seasoned breading, and are sauced and tossed right when you order - in a choice of Classic Buffalo  Sauce or Hot Honey Sauce.

On the 25th, I tried the Arby's Boneless Wings with the Classic Buffalo Sauce, you can read that review here, they were less-than-stellar, glorified, over-sauced chicken nuggets is what I got.

Hoping for better flavor and a better breading crunch, for lunch on the 26th, I tried the Hot Honey version.

I get the marketing thing in calling them boneless 'wings', but they're just not.  These are glorified chicken nuggets all sauced up.  And like the Buffalo sauced 'wings' I had on 'opening day', these Hot Honey nuggets were OVER sauced as well, the nuggets sitting in a pool of sauce, but at least this time around Arby's included a fork with the meal, there was far less mess. I was also given the option to have seasoned curly fries rather than the crinkle cut fries, much to my delight as I prefer the curly fries, WAY better! 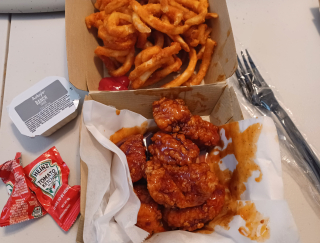 They ask you if you want sauce, on already over sauced chicken, I didn't want any, but got some ranch anyway, which doesn't really go with Hot Honey

The Hot Honey sauce is actually pretty good, you get the sweet from the honey along with a very subtle kick.  It's not quite bbq, but not quite Asian flavor either, it's unique in a tasty way. And despite being over sauced, the Hot Honey does not soggy up the breading on the chicken, I got crunch in every bite.

I gave the Arby's Buffalo Boneless Wings just 3 out of 5 stars making it a borderline repeat buy.  I'm giving Arby's Hot Honey Boneless Wings 4 out of 5 Bachelor on the Cheap stars.  It's a better bite and coupled with the curly fries for just $5 it's a sweet heat of a deal.  The only knock, is the inconsistency in the chicken, you get some large pieces of boneless chicken, wing sized, but you also get little nugget sized pieces.  If they're going to be marketed as wings, don't give people little nuggets.