In search of the best fast food Mac & Cheese, I recently did a food review of the Mac & Cheese offerings of Arby's, Chick-fil-A and KFC. 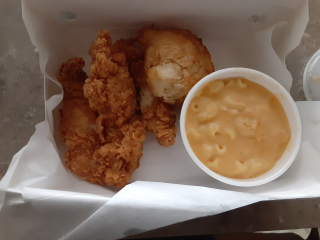 Mac & Cheese is a trending side dish, rising in consumer demand and more restaurants are putting the classic comfort food on their menus.

Today, I'm reviewing what Church's Fried Chicken has to offer.

I only recently became a fan of Church's, with my Ladyfriend introducing me to their chicken tenders and those AWESOME honey butter biscuits one day while running errands.

So during my lunch break on a Thursday and letting the dog out to do his thing, I hit the drive thru at Church's to pick up some of those chicken tenders, a honey butter biscuit and a side of Mac & Cheese. 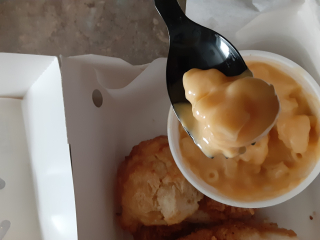 The visual of the Mac & Cheese was unspectacular, with the noodles drowning in the yellow goo of cheese sauce, there was no slightly crispy baked edge to it like I got in the Chick-fil-A version.  The first bite however was good.  Based on appearance I was expecting overcooked noodles and a gummy texture, but I thankfully didn't get that.  The cheddar flavor was there, noodles were firm, overall, a good Mac & Cheese side.  In comparing it to the others I've tried, Arby's, Chick-fil-A and KFC, the Church's version compares favorably to KFC (the best of the lot so far, but that's not saying a whole lot) and I'm giving it 3 out of 5 Bachelor on the Cheap stars, it's good, but not great.  I purchased the Mac & Cheese as a premium side in a chicken tender combo meal, but as a stand alone side it would cost you $2.59.  It's worthy of a repeat buy.