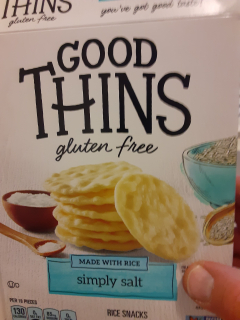 Regular readers know that I started a blood type diet post-holiday, where I diet according to what my blood type 'likes' and that means a diverse diet including meat, fruit, dairy, seafood and grains.  It also means eliminating things my blood type doesn't like, such as peanuts, corn and wheat, a.k.a., gluten.

Costing me $2.99 for a 3.5 ounce box at my local big box grocery store, I selected the simply salt variety made with rice.

These are good crackers!  I kind of expected a rice cake taste and texture to the cracker but these are WAY better than that!  These are crisp, salted nicely and very tasty on their own.  These crackers also hold up well to dips and are a great pairing with cheeses and deli meats.  Bonus thought:  If you're into wine, Good Thins would be a fantastic addition to a Charcuterie board. 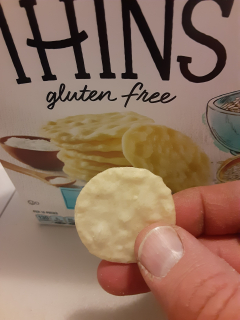 The crackers are a bit on the smallish side and because they're gluten free the price is a bit higher and the box a bit smaller than what you will pay and get in a traditional cracker.  The taste and diversity of these crackers makes the price worth it however.  I'm giving Good Thins gluten free simply salt crackers made with rice 4 out of 5 stars.  Coming in a range of flavors, such as barbecue, jalapeno & lime and garden veggie, I'm looking forward to trying them all! 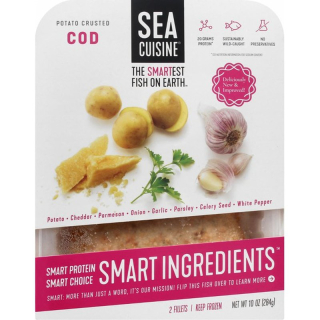 I try to eat fish at least once a week.  I do it because I like fish, not just because it's healthy but the health aspects are undeniable.  Fish is a great source of protein, Omega-3 fatty acids and vitamin B-12, in short, fish is good for the heart and the brain.

There's all kinds of fish variety and preparations available out there at reasonable prices, cod, tilapia, salmon, tuna, shrimp, baked, grilled, smoked and fried (not so healthy).  For dinner on a Wednesday night, I sampled a potato crusted cod made by Sea Cuisine.

Costing me about $8 at my local grocery store for two cod fillets the 'potato' crust is a typical bread crumb mixture blended with potato, onion, cheddar cheese, Parmesan cheese, garlic and celery seed.  So if you're into being gluten free, the crust on this cod isn't wheat free, it's a lot lighter on the gluten, but not gluten free. 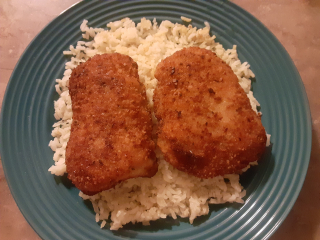 Prepared per the package instructions - baked - this fish came out of the oven smelling fantastic and with that mouth watering visual of being golden, brown and delicious.  I am guilty of a bit of a cheat, lightly spraying the fillets with olive oil before placing in the oven, enhancing the golden brown color and the crunch.

In taking that first bite, I was not disappointed!  The cod was moist, light and flaky, the crust provided a nice little crunch.  The fillets, weighing in at 5 ounces each, are thick and perfectly seasoned, I didn't have to add a thing to them for flavor.  This was a winner, winner fish dinner and I saved the second tasty fillet for lunch the next day.

I'm giving Sea Cuisine Potato Crusted Cod 5 out of 5 Bachelor on the Cheap stars.  It's reasonably priced at about $4 a serving, super easy to prepare and most importantly, quite tasty!  It's a repeat buy.