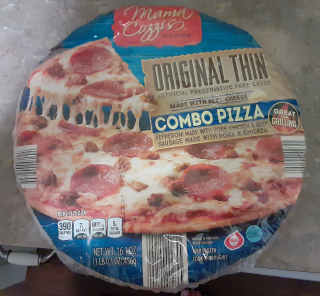 Pizza - Perhaps the greatest food invention ever and I don't know about you, but I don't know anybody that does NOT like pizza.....  I usually have a fr0zen pizza or two in my freezer for those times when I'm craving pizza, but don't want to take the time to make one from scratch, let alone shell out $20 for delivery.

Today I'm reviewing Mama Cozzi's Pizza Kitchen, Combo Pizza which I picked up at my neighborhood Aldi store.   Mama Cozzi pizzas are popular with Aldi shoppers, with a variety of frozen and take-and-bake pizzas available. 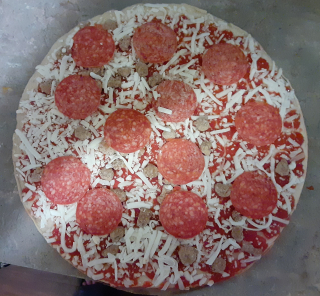 Baked according to the package instructions, I did not doctor this pizza like I usually do by adding mushrooms, onion and extra cheese.  I sample this pizza "As is."

Not exactly generous in topping portions, this pizza lacks flavor.  The pepperoni, made with pork, chicken and beef, is not the real stuff, void of a robust flavor you get with a true pepperoni.  The plus side, it wasn't greasy like some of the fake pepperoni you can get on a bargain price pizza.  The sausage has the same problem, lacking flavor from a lack of seasoning.  The crust was bland and approached the cardboard arena.  The sauce was "eh."  A saving grace, the cheese was good and melted nice.

Priced at under $3, I'm giving Mama Cozzi's Combo Pizza 3 out of 5 Bachelor on the Cheap stars.  It's an "eh" pizza and there are better frozen pizzas out there for about the same price.

Calzones were terrible. Nothing but bread and very little filling. Will never buy again. If I wanted to eat bread, I would have brought a lof!