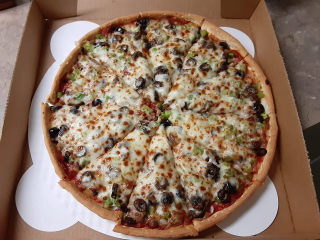 No national chains were included in this challenge.  Only the local, regional pizza joints qualified.  Besides, Domino's sucks, Little Caesar's really sucks (so bad they don't even deserve a link) and Papa John's and Pizza Hut are average tasting pizzas at best.  In all, I tried the pizza from 19 local/regional pizza joints.  Of those 19 pizza tasting endeavors I had to whittle my list down to the 10 best.  So with that in mind, below are the nine that did not make the top 10 list.  Don't consider that a bad thing though, some of these places are still better than Little Caesar's and Domino's.  But that's not saying much.  If you have to choose between Pizza Hut, Papa John's or a local joint, I'd still go local.  Of those joints listed in the "Not Making the Top 10" that crank out a decent pizza (Good but not great pizza rate 3 stars or better, don't waste your time with the others), that is, IF you're going to settle for average pizza, don't do the national chain, support your local pizza joint.

Not Making the Top 10 and NOT worth a visit:

Electric Pizzeria ⭐⭐ THE worst pizza of the challenge, a greasy mess.  You always hope that the local joint can crank out better food than the chain places, but that's not the case here.  I might as well have ordered a Domino's pizza, because that's about how NOT good this pizza is.

Mulligan's Pub ⭐⭐  In taking that first bite, I was disappointed. This was a below average pizza. The crust was over-baked and bland with the flavor profile of a saltine cracker. The toppings, which appeared to be plentiful at first glance, were actually very unbalanced, with veggies overpowering the less-than-generous portions of meat

AJ Sports Grill ⭐⭐It looked pretty on the paddle and while it is loaded with toppings and appeared to be perfectly baked, a closer look revealed that there was too much grease dripping off and I'm thinking that settled in under the crust during the baking process. Instead of a crispy/flaky on the outside but tender/fluffy/airy on the inside bottom crust, I got a soggy, greasy crust in almost every bite.

Avivo Brick Oven Pizzeria ⭐⭐⭐ An 'iffy' 3 stars, let's start with the crust, the foundation of a good pie. The crust was a classic thin preparation, it's got that semolina flour thing (similar in texture to corn meal) working, it was crispy and flaky, overall a good crust, but not a great crust. I am typically a thin crust kind of guy but I found this crust to be a bit underwhelming.

Not making the Top 10 but worth a visit:

Angelo's ⭐⭐⭐  Probably the MOST LOADED with toppings of the challenge but the crust was under-baked and the pie was pricey.  It's a popular pizza with many in Wichita, no doubt because of all those great toppings, but that crust, well, it prevents this pie as a whole, from being a truly great one.

Oak & Pie ⭐⭐⭐  The flavors of the toppings were all on point and quite nice, good pepperoni, a zesty, spicy sausage, roasted garlic that let you know it was there without being overpowering, the pepperoncinis provided the perfect complimentary sweet/heat and the portion of mozzarella was generous. My problem with this pie though and it was a downer - IT WAS UNDER-BAKED! An under-baked crust prevented this pizza from being in the Top 10.

Defazio's ⭐⭐⭐⭐  With high expectations for this pizza, I have to admit, I came away a bit disappointed. Don't get me wrong, it was a good pizza, just not a great pizza. I was hoping for something better from a restaurant priding itself on making things from scratch. Good pizza overall, but not Top 10 in the Wichita Metro worthy.

Deano's Grill & Tapworks ⭐⭐⭐⭐ I have to admit, Deano's was NOT part of my original list of 18 places to evaluate for best pizza in Wichita, but a friend highly recommended Deano's and their Doggy Breath Pizza, so I just HAD to try it!  Deano's was OH so close to cracking the Top 10, it only needed a little more balance in the toppings.

Wichita Brewing Company ⭐⭐⭐⭐ My pizza was set in front of me in what seemed like just a matter of minutes and it was DELICIOUS! It was a concert of high quality meats, set on a superb, thin, nicely seasoned crispy crust and what put it all over the top was that sauce! This was no typical red sauce and all the notes were spot on.  This joint was ranked #10 until the last days of the challenge, getting bumped off the list by Marchello's, the 18th pizza joint sampled.

Here's my list of THE 10 best pizza joints in the greater Wichita Metro area, starting with #10, which is very, very good, but not the best....

#10:  Talliano's Pizzeria ⭐⭐⭐⭐ I ordered carry-out and it was a LONG drive home..... I may or may not have eaten a couple slices on the way back to my apartment.... And Talliano's makes a good pie. The toppings are nicely portioned, to include good, flavorful pepperoni, complimented by the green pepper, there's a more than generous amount of mozzarella cheese.

#9:  Pizza Johns in Derby ⭐⭐⭐⭐ In taking that first bite, it was tasty. The toppings were balanced, nicely portioned and hit all the notes of a classic, supreme pizza. The pie was sauced nicely, not over-sauced, not under-sauced, I'm sounding a bit like Goldilocks and the Three Bears here.... It was sauced 'just right'.

#8:  Bob & Luigi's ⭐⭐⭐⭐ LOADED with toppings the pie is a good balance of meat, veggies and cheese bedded on an airy crust. You get the subtle spice of the pepperoni and sausage, the tender-crisp crunch of the onion and pepper and OH that gooey goodness of the melted mozzarella cheese tied everything together. If there's anything to knock on this pizza though, is it was bit under-sauced.

#7:  Ziggy's ⭐⭐⭐⭐ In taking that first bite, I nodded in satisfaction. This was good pizza. The crust had the crispiness on the outside, flakiness on the inside, the toppings were nicely balanced and presented the classic supreme style flavors well, the sauce was a nice compliment and that cheese brought it all together. I enjoyed every bite, it was nicely prepared and it's easy to see why Ziggy's pizza is popular.

#5:  Knolla's Pizza ⭐⭐⭐⭐⭐  It was LOADED with toppings and it was a flawless balance of meat, veggies, sauce and cheese. The spice of the pepperoni and sausage, the tender-crisp crunch of the onion, the garlic essence of that sauce, the gooey goodness of the melted mozzarella cheese all served up on a perfectly baked crust. That crust.... crackly, crispy on the outside, tender on the inside with each bite. Wonderful!

#4:  Piccaso's  ⭐⭐⭐⭐⭐  This pizza does NOT need Parmesan, red pepper flakes or anything else added! The flavors of the "Kitchen Sink" sing! The sausage is top notch, seasoned well with just the right amount of spice. The pepperoni is good quality pepperoni, not too greasy. The onions and green pepper are mandolin sliced thin, a perfect compliment to the meats, and the mushrooms are fresh, not the canned stuff. The sauce is spot on, the cheese was melted golden, brown, delicious and what puts this pizza over the top is the crust.

#3:  Po Boy Pizza ⭐⭐⭐⭐⭐ This is no run-of-the-mill dough, Po Boy puts some flavor in their product. And while that crust is an awesome, perfectly baked foundation, what put this pizza over-the-top for me was the sauce.  The pizza sauce has some zest, delivering big time on the garlic and oregano notes.  The meats and veggies were all good quality ingredients and generous in portion.

#2:  Piatto Neapolitan Pizzeria ⭐⭐⭐⭐⭐ The crust - the foundation of a pizza - was absolutely beautiful, having a bit of that wood fired char you're looking for on the edges, and in taking that first bite it was soft, pliable and perhaps THE best crust I've had to date in this challenge, allowing for a perfect pizza fold. DELICIOUS!

And the #1 Pizza Joint in the Wichita metro is......  (drum roll)..... Marchello's ⭐⭐⭐⭐⭐ The crust was soft, pliable, buttery, 'pillowy', with just a hint of crispiness on the outer edge from the melted cheese. Now I'm typically a thin crust kind of guy, and this was no thin crust, but it was so good, Marchello's has me rethinking the thin crust thing. With each bite of this pizza I found myself saying, "Wow!"..... The pie was LOADED with toppings and this crust carries it, proudly, the pie was baked to perfection, golden, brown, delicious. Of all the pizzas I've sampled through the course of this challenge, this one was THE most balanced pie I sampled, a perfect marriage of flavors.

So there you have it Wichita, a go-to list of the best pizza joints in the metro area from Wichita's best foodie.