Pizza Challenge Update: Who has the best pizza in the Wichita Metro area? Is it Avivo Brick Oven Pizzeria?

No national chains will be included in this challenge.  Only the local, regional pizza joints qualify.  Besides, Domino's sucks, Little Caesar's really sucks (sucking SO bad they don't even deserve a link) and Papa John's and Pizza Hut are average tasting pizzas at best.  The fact is, most of the local/regional joints can run circles around the national chains in dishing up high quality, great tasting pizza.

During the course of this challenge I have considered customer service, time to order, price, appearance and of course, the most important thing, TASTE. 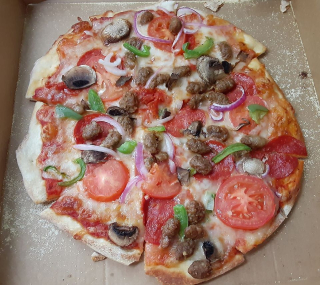 Not exactly loaded with toppings, skimpy on the cheese...

This is the last of the 19 pizza joints I selected for my quest in finding the best pizza in the metro area.  Touting a brick oven preparation, I was really looking forward to sampling Avivo's pizza, did I save the best for last?

Placing a carry-out order over the phone, I ordered the Deluxe, which as you might have guessed, is the restaurant's version of a supreme style pizza.   Here's the description from the Avivo menu online:  Old World Pepperoni, Italian Sausage, Roma Tomatoes, Green Bell Peppers, Button Mushrooms, Red Onions, Pizza Sauce, Mozzarella.  With my order phoned in at about 11:24am, I headed to the restaurant with a promised ready time of about 15 minutes.

I entered the restaurant right at 11:35am.  I was greeted nicely by a member of the staff and let him know I was there to pick up my carry-out order. I paid for my pizza and he let me know my pie was just about ready to come out of the oven so I had a seat to wait.  Avivo's was pretty much spot on with that time frame, they told me 15 minutes, it was out of the oven and boxed in 14.  Nice!

Did the aroma of fresh, hot, pizza torture me on the drive home?

Did I sneak a slice?

No.  I exercised Pizza Discipline....

Getting back to my apartment and without taking off my shoes or removing my jacket, I set the pizza box down on the kitchen counter and flipped open the lid.  I had to take a bite......  OK, pics first, bite second........

I was not impressed. Let's start with the crust, the foundation of a good pie.  The crust was a classic thin preparation, it's got that semolina flour thing (similar in texture to corn meal) working, it was crispy and flaky, overall a good crust, but not a great crust.  I am typically a thin crust kind of guy but I found this crust to be a bit underwhelming.  The slight char you look for in a brick oven done crust wasn't there.  As for the toppings, the pie was topped in unbalanced fashion and not exactly generous.  Some folks might call it a bit sparse in fact.  I didn't get sausage in every bite, didn't get pepperoni or mushroom in every bite and so on....   There was no picture worthy stringy cheese when pulling a slice and I'm not sure what makes Avivo's pepperoni "Old World" (according to their menu) because it's nothing special and the sausage was average.  The green peppers and red onion were nice, providing a nice tender crisp bite.  The fresh mushrooms rather than canned were appreciated and the Roma tomato slices were a nice touch, complimenting the sauce which was pretty good.  Overall, this pizza lacked zest, it NEEDED the Parmesan cheese to kick the flavors up a notch.  The dainty and thin pizza offering from Avivo's left this eastsider thinking, "I drove all the way over to the west side of town for that?"

Costing me $11.83 for a small pie, I'm giving Avivo Brick Oven Pizzeria 3 out of 5 stars.  The price is reasonable but the product is underwhelming, especially for a brick oven preparation.  I was disappointed in this pizza, it lacked a "Wow!" factor and so Avivo's in my book, is not worthy of a repeat visit.

The service was courteous, attentive, and my carry-out order was prepped, baked and boxed on time with a minute to spare.  Perhaps the pie should have been left in the oven for that extra minute.....  'just say'n.