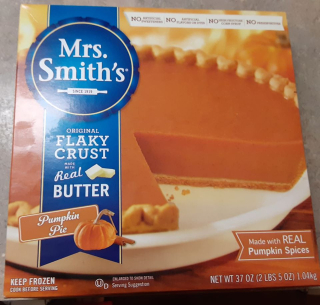 In my book you can't have Thanksgiving or Christmas without some pumpkin pie, so here's a review on Mrs. Smith Pumpkin Pie, you'll find it in the freezer section of your neighborhood grocery store.  Why the Mrs. Smith's brand?  Because timing is everything.  When I went shopping for the holiday dinners, this was the only brand of frozen pumpkin pie available and only a few of the Mrs. Smith's remained!

Preparing the pie per the box instructions, the pie came out of the oven smelling good, I hit the outer edge crust with a little butter and set it aside to cool. 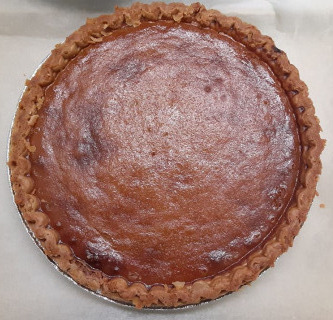 TIP:  Baking your pies the day before or first thing in the morning on Thanksgiving or Christmas Day ensures your oven is free for the main events of the day, namely the turkey and the casserole sides, which need to be served hot.  You don't want to wait and bake your pies after roasting the turkey thinking they'll be done in time for dessert because they won't.  Pies need time to cool and set up.  The last thing you want is a runny (too hot and not set up yet) pie and the flavors just won't be there like they are with a cooled and set pie.  Although to admit, hot fruit pie over vanilla ice cream, while a bit messy, IS pretty darn good....

There is a reason pumpkin pie and whipped cream is a favorite on Thanksgiving Day and carries over into Christmas.  But does Mrs. Smith deliver in the flavor department?  Over the years of Thanksgiving and Christmas celebrations, I've had home made pies from Moms, Grandmas, Aunts, pies from restaurants, pies from bakeries, pies from specialty stores.... Mrs. Smith's comes up a bit short.  It's good, but not great, in other words, it's adequate, satisfying the pumpkin & whipped cream craving.  When it comes to prepared pies from the frozen section at the grocery store, Marie Callendar's makes a better pie. 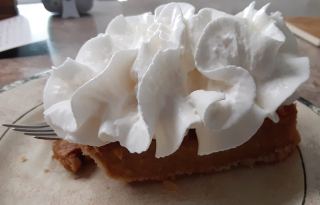 Costing me $4.99, I'm giving Mrs. Smith's pumpkin pie 3 out of 5 Bachelor on the Cheap stars.  The price is average, for an average tasting pie.  The crust was OK, the filling was OK, as in lacking enough spice, the pie NEEDED the whipped cream.  There's a reason why the Mrs. Smith's brand was the only remaining brand of pumpkin pie available in the grocery store freezer.

Why dont the stors have mrs smith punkin pies