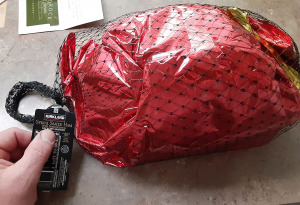 I'm a ham for Christmas dinner kind of guy and I don't like to do a lot of carving either.  I like low maintenance cuts of meat, so a spiral cut ham was on the shopping list.  I wanted something large enough to provide leftovers and stash some in the freezer for later enjoyment as well.

Already hickory smoke cured, I purchased a bone in Kirkland Signature spiral sliced ham at Costco for $19.24.  Weighing in at slightly under 8-1/2 pounds, that's just $2.29 a pound and Kirkland throws in a glaze - bonus!  That's a Bachelor on the Cheap friendly price and the ham was delicious, definitely a repeat buy!

I put my ham on the grill over pecan wood to enhance that smoke cure and the spiral cut really embraced that glaze.  The Kirkland Signature spiral ham gets five out of five Bachelor on the Cheap stars, it was the perfect main dish for Christmas! 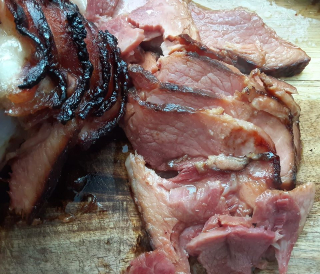 Putting a spiral ham on the grill or smoker is easy peasy.  This is a pre-cooked ham, so basically you're just bringing it up to temperature and enhancing the flavors.  Just put the ham, flat side down on a disposable aluminum pan (you may want to double up on the pans depending on the weight of the ham), pour some kind of juice over the ham.  Orange, pineapple, apple, whatever, I like to use a sweet & sour mix myself.  Grill (or smoke) over indirect heat (on a smoker that's a given), for about 15-20 minutes per pound of ham at around 275 - 300 degrees.  Wait to glaze the ham until that last 20 minutes of cooking time, brushing the glaze in between each slice.  Pull the ham from the grill (or smoker) and let it rest for about 10 minutes, tenting with aluminum foil.  A spiral cut ham from the grill is another dose of YUM!