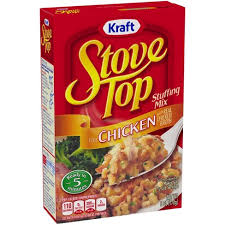 Boxed stuffing, I love the stuff - see what I did there? - but like most folks, I only eat it a couple times a year, typically on Thanksgiving and Christmas.  There are all kinds of flavors too, traditional turkey, chicken, pork, veggie varieties and even corn bread stuffings - Yuck, I prefer traditional bread crumbs over corn bread crumbs in my stuffing, 'jus say'n.

I like the boxed varieties primarily for the simplicity and convenience of it, to me making stuffing from scratch isn't worth the trouble.  I doctor the off-the-shelf stuff anyway with a few added ingredients so there's no real benefit in the flavor department by making stuffing the hard way.  Then there's the price.  A boxed variety is cheaper than buying the bread crumbs, chicken stock and various seasonings all separately. 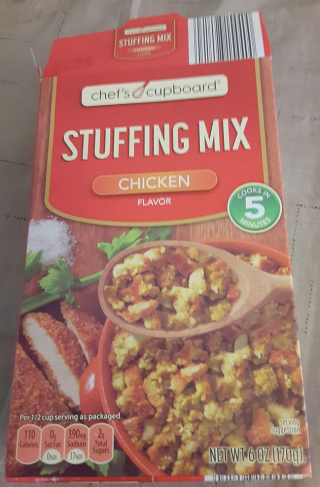 But even if you're a boxed stuffing mix person like me, you could still be spending too much for it.  Don't buy the name brand like Stove Top, buy Chef's Cupboard instead, it's every bit as tasty, just as easy to prepare and costs about half as much.

A six ounce box of Stove Top brand stuffing mix will cost you roughly $1.50 - $1.99 at the mainstream grocery store.  In comparison, a six ounce box of  Chef's Cupboard brand stuffing mix costs just 69¢ at Aldi.  That's a savings of at least 81¢.  And while that savings doesn't sound like much by itself, when you take that approach to buying all the other items for your holiday feast, those savings rack up.  I don't know about you, but I like buying that holiday meal for about $47 in discount brands rather than about $72 with name brands.  Not only is that some significant savings, the best part is there is NO sacrifice in flavor or quality!

When putting my stuffing together, I prepare the mix per the box instructions, adding some diced and sauteed onion, carrot and celery along with some crumbled sausage, minced garlic, sliced mushrooms and a dusting of Parmesan cheese.  This year I kicked things up another notch with an additional touch, preparing it in a cast iron skillet and putting it on the smoker over pecan wood to absorb a hint of smoke, complimenting the smoked turkey and spiral sliced smoked ham at my feast. 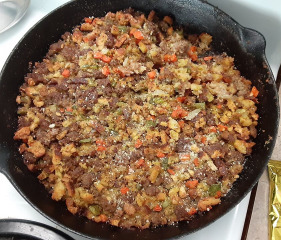 I'm giving Chef's Cupboard chicken flavor stuffing 5 out of 5 Bachelor on the Cheap stars.  The price is wallet friendly, it's easy to prepare, easy to doctor and easy to eat!  This is a stuffing mix worthy of a repeat buy, don't buy the name brand stuffing, buy Chef's Cupboard instead!