Applebee's 25 cent boneless wings is worth a visit

For a limited time, Applebee's is serving up boneless wings at a VERY Bachelor on the Cheap friendly price!

It’s that time of year again. Baseball, basketball, hockey and football are all happening at once! What better way to celebrate than by watching it all with some 25¢ Boneless Wings. Because right now, we’re serving up 25¢ Boneless Wings covered in our classic buffalo sauce for a limited time!

With that in mind, I stopped in my neighborhood Applebee's on a Monday night for some Monday Night Football.

Arriving at about 6:30pm, the restaurant was perhaps 1/3 full and I found a nice seat at the bar with about 5 TVs easily viewed, all providing various sports programming to include the MNF pregame show. 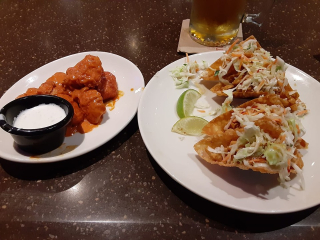 Does that look delish or what?

I was greeted warmly by the bartender and I ordered up a Miller Lite while I reviewed the menu.  Applebee's lays the menu out on the bar as part of the place setting, which is kind of nice, patrons don't have to ask for or wait on a server to provide one.  Enjoying my frosty mug of Miller Lite which was served lickity split and intent on getting some of those wings, something else caught my eye from the appetizer section of the menu.....

I had to have those!

With the bartender, Amanda, asking if I was ready to order, I asked her how the 25 cent boneless wings thing worked. 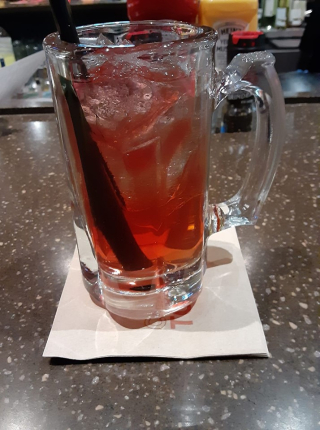 "They come with our classic buffalo sauce and the minimum order is five, how many would you like?" she replied with a great smile.

"Sounds good, I'll take six and I'd like to try those Wonton Tacos as well," I said.

The bartender with the great smile placed my order and I settled in on watching the pregame and enjoying my beer.

It didn't take long at all for my order to arrive and the visual appeal of those Wonton Tacos was mouthwatering!

So even though I went to Applebee's with a mission of enjoying those 25 cent wings, I dug into the Wonton Tacos first...

These things are FULL of great flavor!  The grilled chicken is indeed tangy and nicely portioned.  The sauces are well balanced, that coleslaw is creamy yet gives you that nice bite of texture, but what puts these things over the top are those perfectly prepared wonton skins shaped into mini taco shells.  The chili sauce, grilled chicken, the slaw, cilantro, it all comes together beautifully in the CRUNCH of those shells!  I got all those great flavors in every bite!  Nicely done Applebee's!

Oh, and the boneless chicken wings, the food I went to Applebee's for.....  They were good, but not great.  Lacking a bit of the crunch I was expecting in a breaded wing offering, they weren't prepared as well as the tacos.  The sauce was good and the chicken was sauced well, good coverage, but the breading just didn't provide the crunch I was hoping for.  I have had better wings, but I've also had much worse and for the price, I was still quite satisfied with the order.

Then there's the drink of the month.

So I noticed a few patrons enjoying these, a mug filled with a combination of vodka, cranberry juice & lemonade....  For $1!  After I finished my beer, I made the switch.  These are dangerously smooth ladies and gentlemen!  This particular drink special is good through November.

I spent $18.73 on a beer, two vodka, cranberry juice & lemonade drinks, the boneless chicken wings and those OUTSTANDING Wonton Tacos.  After leaving a $4 tip my total expenditure was $22.73.  The boneless chicken wing in classic buffalo sauce made my visit to Applebee's totally worth it, despite being average wings because I discovered those Wonton Tacos and the $1 drinks as well!  Applebee's is Bachelor on the Cheap wallet friendly and this appetizer meal is worthy of a repeat buy.  I'm giving Applebee's 4 out of 5 Bachelor on the Cheap stars.

The service was top notch, the bartender super friendly, the food was good and reasonably priced.