In the battle of brisket sandwiches, it's Subway vs. Hog Wild Pit BBQ 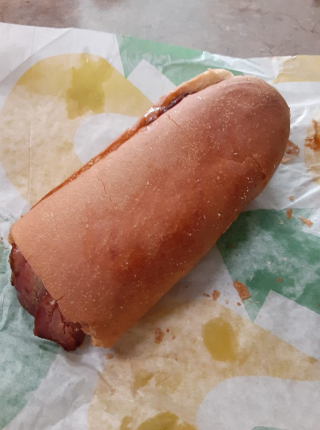 I was motivated to write this particular article because:

For a limited time - through November 7th - Subway has finally jumped on the brisket train of popularity by offering what they call a Pit-Smoked Brisket Sandwich.  My review of the sandwich can be read here.   To sum, the brisket was under seasoned and didn't give you the smoke flavor you're looking for in something supposedly smoked for 13 hours.  And while it wasn't a great sandwich, it wasn't bad either and it dawned on me while eating it and pondering the review write-up, that it was better than what Hog Wild offers!

So in the name of "Food Science" I went across the street from my neighborhood Subway and purchased a brisket sandwich combo from Hog Wild (sandwich, side, drink).  I got a side of mac & cheese and a lemonade.  As previously stated, I'm not a fan of Hog Wild, previous reviews can be read here and here.    And it was confirmed:  What I was thinking in eating the Subway brisket sandwich was true, Hog Wild's brisket sandwich is inferior - and they're a bbq joint! 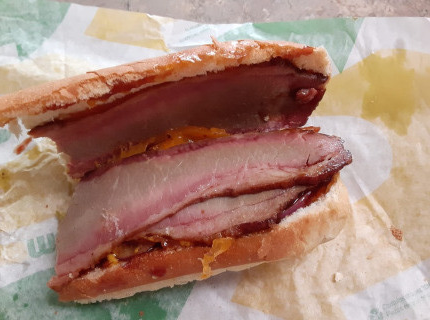 The Subway brisket sandwich cost $6.99 for a 6 inch sandwich. That's just for the sandwich, I didn't get chips or a drink.  That's a higher price than Hog Wild, but you do get your choice of bread and how you can doctor up your sandwich with a variety of toppings which in my case was smoked cheddar, red onions, pickles and some mustard to accompany the bbq sauce.  In the price comparison, the Hog Wild brisket sandwich as a value meal cost $6.49.  It's not something you can really doctor up though, pretty much served as is, coming with a standard bun, brisket, some sauce, no frills.  I did go to the drink/condiment service area and picked up some pickles for the sandwich.  The only plus for Hog Wild, the meal does come with that choice of side and a drink.  Their mac & cheese isn't bad.

But here's what makes the Subway Sandwich better than Hog Wild (and that's not saying much)....  Not only is the Subway sandwich a much larger sandwich, despite the brisket being under seasoned, it was tender meat and how you can doctor up the sandwich makes up for the lack of some smoky flavor.  Subway also slices their brisket, a HUGE plus over what Hog Wild does, which is to pull/shred the brisket.   In my book, that's a BBQ crime.  Modern brisket sandwich making is SLICED.  And you have to wonder if you're getting 100% brisket in that shred, considering what they try to pass off as burnt ends aren't really burnt ends.  The sauces used on the sandwiches were both Kansas City style sauces, on the sweet side, neither sauce being particularly better than the other.  Subway also gets the nod with better bread. 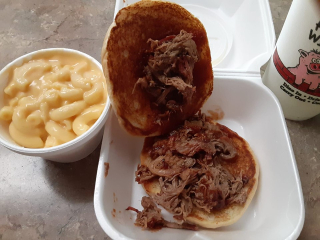 If these two restaurants are your only choices for a brisket sandwich, go with Subway.

But don't take that to mean either of these sandwiches are a repeat buy, neither are.  I just thought that it's a sad statement.... that a sub shop can make a better brisket sandwich than a BBQ joint.

This was a fun challenge, but not the tastiest of challenges.