Pizza Challenge Update: Who has the best pizza in the Wichita Metro area? Is it AJ's Sports Grill? 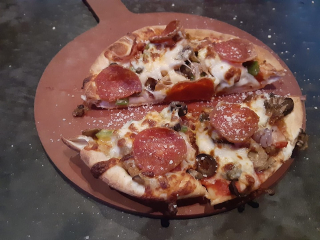 The pizza 'foundation' for this challenge is a supreme style of pizza - meat and veggie toppings.  In order to do a fair evaluation of all pizza joints, the choice of toppings has to be as similar as possible.  AJ's version of a supreme pizza - They call it the Perfect 300, working that bowling theme  - features the classic supreme style of pizza toppings and a few extras, pork and Italian sausage, pepperoni, beef, Canadian bacon, green pepper, onion, black olive and mushroom.

I chose AJ's to be a part of this pizza challenge for two reasons, 1.  Their pizza was recommended by a friend, and 2.  It was Monday night and it doesn't get much better than Monday Night Football, cold beer, pizza and two HUGE big screens for easy viewing at the bar.  I entered the place close to 7pm, I was surprised however to see how empty the place was.  A couple tables were taken and just a few patrons were seated at the bar.

I found a seat with the aforementioned TV view and Erick the bartender was quick to give me the standard "Welcome, and what can I get you to drink" acknowledgement.  I ordered a 20 ounce Miller Lite which was properly poured and set on a coaster in front of me in short order. 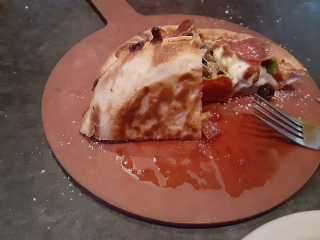 The grease reveal.  It even puddled on the fork!  Click to enlarge, you can actually see how 'wet' the crust looks!

That's when the service went downhill.  I viewed the menu that was already sitting there on the bar, then placed it down and waited, and waited, and waited....  When my beer was about two-thirds gone and MNF underway, I finally had to wave the bartender over to place my meal order.  He took my order and went back to what he was preoccupied with, hanging out with what seemed to be a regular, sitting across from me at the bar.

My pizza didn't take long to arrive, Erick setting it in front of me, asking if I wanted Parmesan cheese or pepper flake, as he set a small plate and silverware by my beer.  I went with the Parm and asked Erick for another beer.  Another was poured and I took that first bite of pizza.

Looks are deceiving!  The "Perfect 300" was far from perfect.  It looked pretty on the paddle and while it is loaded with toppings and appeared to be perfectly baked, a closer look revealed that there was too much grease dripping off and I'm thinking that settled in under the crust during the baking process.  Instead of a crispy/flaky on the outside but tender/fluffy/airy on the inside bottom crust, I got a soggy, greasy crust in almost every bite.  It really kind of ruined the whole experience which is a shame, because I got the notes of the meats and veggies, highlighted by the Canadian bacon and tender-crisp green pepper, but that greasy crust just took all the yum out of the pie.  And while the cheese was generous in portion, the sauce was less-than-stellar, no real zest to it.  If it had any garlic or oregano notes, it got lost in the grease and soggy crust.  This little 6 inch "Individual" pizza was a sad entry in the pizza challenge, I've had a better pizza experience buying Red Baron Mini Pizzas and doctoring them up with extra ingredients at home!

The little 6 inch "Individual" pizza is the smallest pizza I've had so far in this challenge.  The small in other joints is a bigger pizza and costs less.  I paid $8 for this disappointment.  Along with two beers at $4.50 each and non-attentive service - Erick never asked me how my pizza was, I had to ask him if I could order a meal, he didn't offer let alone suggestive sell, and I also had to ask for a second beer -I shelled out $20 I would have rather spent somewhere else.  I'm giving AJ's Sports Grill and their pizza just 2 out of 5 Bachelor on the Cheap stars.   The pizza is NOT a repeat buy and the place is not worth a repeat visit.