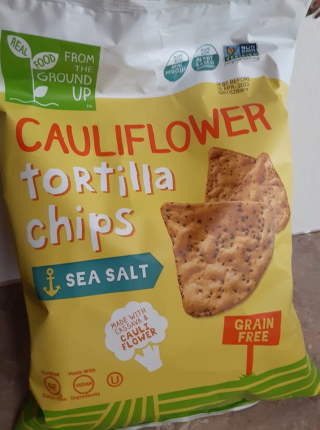 The company calls it a cauliflower chip, even though cauliflower is listed as the second vegetable ingredient behind cassava and there is a laundry list of other veggie ingredients.  I suppose it's a marketing thing, picking up on the cauliflower trend and far more people are familiar with it, than they are cassava.  What is cassava?  It's a root vegetable native to South America.

The chips are indeed tasty and they hold up well to dipping in salsa.  I tasted them by themselves, with salsa, I used them to make nachos.  They do well in any classic tortilla chip preparation.

But are they really a healthier chip?

Not really.  A serving of these "cauliflower" chips actually have more carbs than many traditional chips at 19 grams.  Classic Lays potato chips come in at 15 grams, Fritos have 16 grams and Doritos also have 16 grams of carbs.  Cauliflower is indeed a low carb veggie, but there's the marketing manipulation by this company, all those other ingredients in that "cauliflower" chip drives up the carb count.  So don't buy this chip thinking you're eating a low carb alternative because you won't be.  And while the fat gram count is a bit lower at 6 grams vs. 10 grams in a traditional chip, other metrics such as sodium, sugar and dietary fiber are only marginally better or are in the same amount as regular chips. 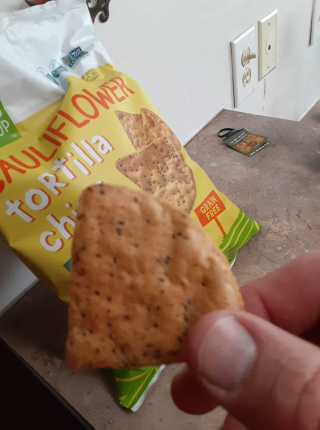 Costing me $5.99 for a 4.5 ounce bag, it's a pricey bag of chips and a small bag at that.  If you're a vegan, you'll be glad to know these are certified vegan, but real chip lovers could care less.  These chips are also certified gluten free, but there's more marketing gimmick, most potato and corn chips are gluten free.  Gluten is a wheat, rye and barley thing, not a potato or corn chip thing.  Overall, these chips score well on flavor and crunch, but they are NOT Bachelor on the Cheap wallet friendly so I'm giving Real Food From The Ground Up Cauliflower Tortilla Chips 3 out of 5 Bachelor on the Cheap stars.  They are not worthy of a repeat buy.  I'd rather get a much bigger bag of tortilla chips for less money and no marketing b.s.