Pizza Challenge Update: Who has the best pizza in the Wichita Metro area? Is it Mulligan's Pub? 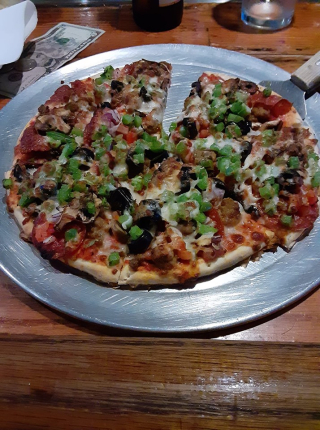 The pizza 'foundation' for this challenge is a supreme style of pizza - meat and veggie toppings.  In order to do a fair evaluation of all pizza joints, the choice of toppings has to be as similar as possible.  Mulligan's version of a supreme pizza - they call it that, a supreme - features the classic supreme style of pizza toppings plus a few extras, hamburger (not typical), pepperoni, sausage, green pepper, tomato (not typical), onion, black olive and mushroom.  I was looking forward to this, after all, their website boasts of being famous for their "amazing" pizzas!

I arrived at Mulligan's a bit after 6pm on a Tuesday evening.  With only about 13 people in the joint, I found a seat at the bar.

A gentleman who seemed to be the manager welcomed me and asked me what I wanted to drink and I responded with, "A Miller Light please."  He promptly popped the cap off a bottle and gave me a chilled glass to pour it in.  He let me know who my server would be - the bartender - and she provided me a menu.  Sorry, but I didn't catch her name and given how slow her service proved to be, I didn't care to ask.  Henceforth, she's just, "the lady bartender."

I was enjoying that cold Miller Lite, but the menu I had long since put down as a signal I was ready to order was starting to collect dust.  The lady bartender was focused on texting......    When she finally broke from her phone and came over to take my order, I went with the small Supreme Pizza and I thanked her.   She didn't notice that my beer was nearly finished.

Mulligan's does a classic pizza pie presentation on a thin crust, and it's served on a traditional pan w/spatula at the table. 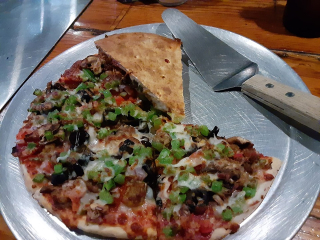 In taking that first bite, I was disappointed.  This was a below average pizza.  The crust was over-baked and bland with the flavor profile of a saltine cracker.  The toppings, which appeared to be plentiful at first glance, were actually very unbalanced, with veggies overpowering the less-than-generous portions of meat.  Look at how overloaded the diced green pepper is on that pizza, underneath that is a layer of onion, and then the layer of diced tomato, all hiding the skimpy meat portions.  The sausage was nothing to write home about and the few pepperoni slices that can be seen on the edges escaping the over-abundant coverage of the green peppers and onions was unremarkable.   This was more like a veggie pizza, than a true, classic, well-balanced supreme.  And the sauce...., well, it was less-than-stellar too, the pie was under-sauced and like the crust, bland.   It lacked the zesty notes of garlic and oregano you're looking for in a good sauce.  Oh, the cheese was good, but an afterthought.

I spent $20 for a small pizza, two Miller Lites, plus tip.  So the price was reasonable, but the pizza was disappointing and the service really kind of sucked.  I HATE it when a waitress/waiter/bartender asks if you want change back!  I think that's just flat out rude and a server worthy of their apron doesn't need to ask.  I paid as I went on this visit, paying for my first beer and the small pizza with a $20 bill, giving me $5 and some change back....  Then I ordered the second beer.  When I settled up that left $2 and some change which I was perfectly fine leaving on the bar (and if the food/service would have been better I would have pulled a couple more singles out of my wallet to put the tip at 20+%), but the lady bartender asked, "Did you want your change back?"  Shaking my head, I responded, "No, that's OK," while thinking, lady bartender, you didn't even deserve that 10+%.   Hey Mr. Manager, your welcome as I found a seat at the bar was great, but things went downhill after that.  Maybe spend some more time training your bartender on some customer service skills?

I was in and out for my pizza dinner, not wanting to hang around any longer than I had to.  I'm giving Mulligan's Pub Supreme Pizza just 2 out of 5 Bachelor on the Cheap stars and neither the pizza or the pub itself are worthy of a repeat!  NOT amazing.

Mulligan's Pub is located at: