Pizza Challenge: Who has the best pizza in Wichita? Is it Angelo's? 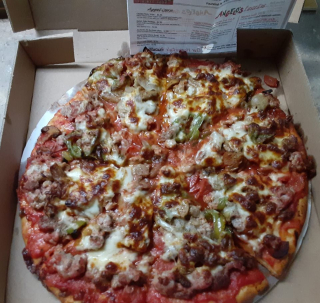 No national chains will be included in this challenge.  Only the local, regional pizza joints qualify.  Besides, Domino's sucks, Little Caesar's really sucks (they're so bad they don't even deserve a link) and Papa John's and Pizza Hut are average tasting pizzas at best.  The fact is, the local/regional joints run circles around the national chains in dishing up high quality, great tasting pizza.

Tonight I ordered a pizza from Angelo's, a recommendation from a friend.  I went with their "Truly Deluxe" pizza, ordering carry-out.  The order is in line with the other orders from the various pizza places I have or will be visiting, ordering a large, supreme style of pizza - meat and veggie toppings - and ordering carry out.

I arrived at the restaurant at 6:15pm on a Wednesday night.  The restaurant was busy but my order was ready and on-time, just like I was, at 6:15pm.  The service at the counter was friendly enough and kudos for the on-time order.  And boy did my pizza smell delicious!  I paid for my pie along with a soda to wash it down with and back home I went.

Side Note:  As I'm driving.......  I'm re-thinking this carry-out order thing.....  I'm going to have to start eating in the pizza parlors.....  The drive home with the pizza box sitting next to me in the passenger seat is SO tough, with those fantastic aroma's slapping me in the face.....  It's almost painful!  Almost.....  What really hurts, is the discipline in resisting the temptation to sneak a slice before I get home.

Once inside my apartment, it was time to feast.  But before diving into the taste, take a look at that picture again.....  this pizza is LOADED with toppings!  There's homemade Italian sausage, HUGE chunks of spiced ground beef, house-cut, as in THICK cut pepperoni, sauteed mushrooms, green pepper and onions, all topped with mozzarella.

I got everything with that first bite, it was a mouthful!  That thick cut pepperoni and the huge chunks of seasoned beef provided a nice little flavor burst of spice. The sauce was good, nice coverage, maybe even a bit over-sauced, not bland, but not something I would call zesty either.  The generous portion of mozzarella cheese (a bit one-note) was beautifully melted, a perfect picture of golden, brown, and delicious, tying everything together.   Overall, this is a good pizza, thanks to all those great toppings, but the crust was disappointing.  The foundation of a good pie, the crust is supposed to hold up to the toppings and this one didn't.  It was doughy, almost chewy.  It's a challenge to have a crust that's flaky with a bit of crunch on the outside, but tender on the inside when the pie is SO loaded with toppings.  But that's the issue with the Angelo's Truly Deluxe, it's not balanced.  Overloaded with so many ingredients, the over-generous coverage of toppings, the juices from the meats and the sauteed mushrooms, combined with the sauce, well, all that 'stuff' doesn't allow the crust to crisp up on the bottom or even on the edges.  A good pie has crispy crust on the edges.  The Truly Deluxe does not and more baking time would have pushed the cheese well beyond golden, brown and delicious.  I have to wonder if that's a sacrifice Angelo's has willingly made with this specialty pizza.  It's a popular pizza, no doubt because of all those great toppings, but that crust, it prevents this pie as a whole, from being a truly great one.

I paid $35.37 for a large Angelo's Truly Deluxe Pizza and a 20 ounce bottle of soda.  That's not a Bachelor on the Cheap friendly price.  It's flat out a high price to pay for a pizza, despite the great toppings.  With the crust not measuring up, I'm giving Angelo's 3 out of 5 Bachelor on the Cheap stars and it's a borderline repeat buy.  I've got a lot of other pizza joints to try before making the repeat buy decision.