I always have some kind of cereal on hand.  Sometimes it's for breakfast, sometimes with a little fruit and a heavy dose of cream, it makes for an impromptu dessert.  And although Captain Crunch with Crunch Berries is my all time favorite cereal, that's not what I typically have on hand.  My pantry is routinely stocked with corn flakes, toasted oats or bran flakes.

Do you pay the premium price for the name brand?

If you do, you might think twice about doing so after reading this article. 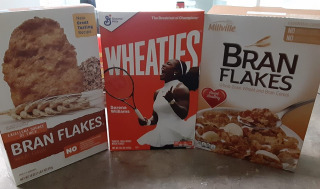 I compared price, weight, the look, taste (both dry and w/milk) and the 'sogginess' factor.

According to the General Mills website, Wheaties was created in 1922, as a result of an accidental spill of a wheat bran mixture onto a hot stove by a Minnesota clinician working for the Washburn Crosby Company (later General Mills).  It's an iconic cereal, a box of Wheaties has been a staple in millions of American homes - especially the homes of young, sports minded kids - for decades.   Sometimes the allure of what mega-star sports figure adorned the box was enough to buy it.  I know I did when Walter Payton was featured and those empty boxes are worth something nowadays.  If you look on ebay, Walter Payton Wheaties boxes are selling for up to $35 each!  It's a better seller than Olympic star Mary Lou Retton.  And of course, who isn't familiar with one of the greatest food taglines of all time:  "The breakfast of Champions" 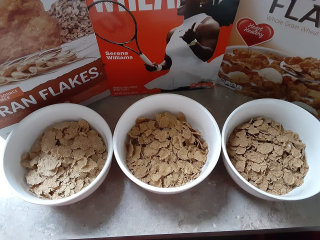 That price for a box of Wheaties is on the high end of pretty much every other kind of cereal on the grocery store shelf, it's not THE highest, but it's up there.  If you read the first cereal battle, Kellogg's Corn Flakes came in at $3.39 and in the second battle, Cheerios was priced at $2.79, on the low end of the spectrum in comparison of name brands.   Also noted in that first battle, was how much taller the Kellogg's Corn Flakes box was even though the weight of the cereal was the same as for the store and discount brands.   In a side-by-side-by side comparison, all three boxes of wheat bran cereal are approximately the same.  It's an old school marketing gimmick and General Mills doesn't seem to be playing it with box size.   General Mills, using the same size box as Kroger, just flat out puts a lower amount of flakes in their box.  Priced at $4.47 for the box, that comes out to 28.6¢ per ounce.

For the look, taste (both dry and w/milk) and the sogginess factor, I'll summarize all three cereals in a bit. 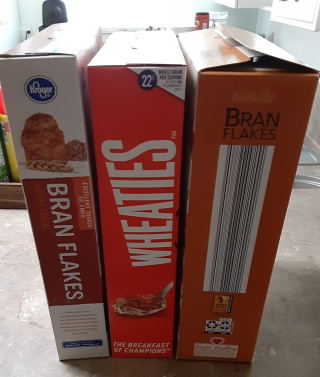 This is priced the same as for Kroger's knock off of Wheaties and it's the same volume of cereal.   To note, Millville put their 18 ounces of cereal in a bigger box.  Why, I can't say, because the Millville brand is pretty much the only brand of cereal Aldi carries.   Maybe they think you'll compare box sizes at home?  The important question is, how does Millville compare to the other two cereals in this battle?

When it came to the look, there are a few notable differences.  Wheaties appears to be the most "golden brown" in color, perhaps a bit more eye appealing than the two knock off brands.  The Millville flakes mimic Wheaties better than the Kroger brand, which looks to be quite a bit drier if that's possible in a wheat bran flake and with that, the flakes themselves are less uniform and some quite a bit larger in size.  In the taste test, they all tasted virtually the same, sampled dry and with milk, none more sweeter or less robust in wheat flavor than the other.  But the crucial part of the test, the sogginess factor......  Wheaties comes out on top on this one, I got through most of the bowl before sogginess set in.   Aldi's discount brand Millville came in second in this factor and the store brand, Kroger came in last - I hit sogginess about 3/4 through the bowl.  It might have something to do with that drier looking flake, it just absorbed the milk.  Wheaties also has the better crunch of the three, a more satisfying crispy/crunch flake going on.....

Wheaties gets top nod when it comes to crunch and the sogginess factor, but is that worth paying the premium price?  No!  For my money, I'll take the Millville version of Wheaties.  Although the price for the two knock offs is the same and for the same amount of cereal, the Millville flakes are slightly better than the Kroger flakes, it came down to the sogginess factor.

So if you have been a buyer of the name brand, there's really no reason to continue doing so.  Save yourself some money with the discount brand from Aldi.   It really doesn't matter what sports star graces the front of the box.

And if anybody out there reading this is making the argument that this wasn't a fair comparison, because Wheaties are "Wheat flakes and not bran flakes, those are two different things.".....  Think again.   The first and main ingredient on all three box labels is:  Whole Grain Wheat.

Millville and Kroger are made at the same plant..

How do these compare to Total cereal?

Total tastes about the same as the others to me but it's loaded with vitamins. It's also expensive, same price as Wheaties. As for sogginess that's never a factor for me because I pour in the milk first and then pour a little cereal at a time, eat it and pour in more. Always crunchy until the end.