The Impossible Whopper, in it's "green" wrapper

Yes, you CAN tell the difference between a regular Whopper and an Impossible Whopper.  Easily!

With the Burger King commercial in mind and having sampled a few fake meat burgers on occasion (and not really liking them), I traveled to my neighborhood Burger King to give the Impossible Whopper a try.  It's been awhile since I've tried a veggie burger (cough) so what the heck and maybe they're onto something, right?  I ordered a Whopper w/cheese and an Impossible Whopper w/cheese for a mano e' mano of sorts taste comparison.  I didn't do the value meal thing, just ordered the two "burgers."  I didn't special order any ingredients on or off, both burgers were prepared with the standard toppings, lettuce, tomato, mayo, pickles, onions, ketchup and cheese. The before taking a bite pic shows the outside appearance of both burgers to be very similar.  Not surprising, after all, all ingredients are identical except the patties.

A closer review of the patties however, well, you can clearly see the difference.  Look how hockey puck the Impossible patty is.  The perfect circular shape, the rigid, straight side, the overkill on the grill marks (plants burn a lot quicker than beef, more on that in a bit)....

I first took a bite of the regular Whopper w/cheese.  Just as it should be, juicy, the classic combination of ingredients giving you a nice burger bite.

Then I took a bite of the Impossible Whopper.  Now keep in mind, Burger King claims this is 100% Whopper and 0% beef and their commercial would have you believe there is no difference in taste..... 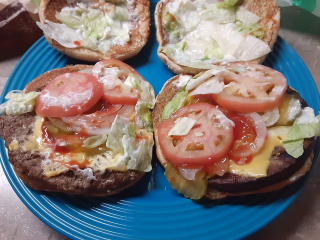 Can you say, "Hockey Puck?"

Oh, but there IS.

I tasted the Impossible Whopper just like I did the regular whopper, taking every ingredient in.  It just doesn't measure up to the real thing.  Not even close.  It's less juicy, less savory, less "beefy."  It's somewhat palatable, but it's the classic toppings that make it so, NOT the fake meat.  After sampling each burger, I then took a bite of just the regular Whopper beef patty.  Tasty!  You know, what meat tastes like.  Then I took a bite of just the Impossible patty.  Not so tasty!  It was dry, a bit mealy and that char doesn't compliment the soy protein, it comes off as borderline burned.

If Burger King is banking on the Impossible Whopper to curb the rate of BK restaurant closings (more than 100 were shuttered last year), they are taking a serious gamble with this.  Can you say, "200+ additional BK restaurants to close by 2020? 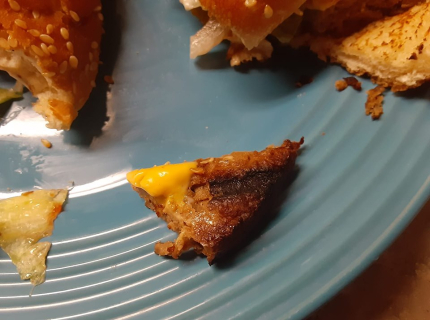