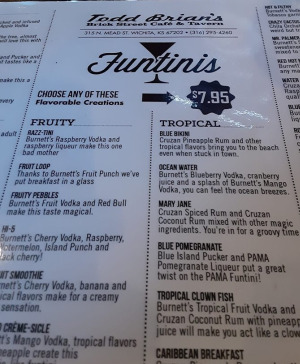 A friend of mine had a birthday yesterday and to celebrate, there was a little get-together last night at Todd Brians Brick Street Cafe & Tavern, a local establishment boasting of Wichita's best American and Cajun food.

Located in Old Town, Todd Brians is also known for it's "Funtini" menu and on this night, they were half price!  Funtinis are colorful spins on martinis, creations of all sorts, tendered up using a playful assortment of flavored vodkas, rums, juices and other ingredients.

I've never been to Todd Brians before but in a quick review of their website and menus, it sounded like a fun time.

Arriving at the establishment around 6:30pm at the same time as my birthday friend and his lady, we were greeted warmly by a member of the wait staff and the pre-arranged party table was set and ready for us, so we had a seat.  So far so good!

About as soon as we picked up the drink menus to look over, our waiter arrived at our table to take our orders.  We decided on those Funitinis to get started, each of us ordering something different to sip on while we waited for other guests to show up.  Let's get this little party started, right? 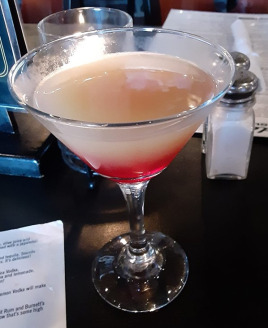 After a few sips.... Deliciously Smooth!

Well, not so fast.....  the drinks took awhile to journey from the bar to our table, which was kind of surprising because at this point the place was less than half full and appeared to be well staffed with a couple staff members just standing around and chatting.  Once our drinks did arrive though, they were eye pleasing and filled to the brim!  I ordered the Kentucky Sunshine, which is Burnett's Cherry and Whipped Vodkas, mixed with bourbon and orange juice.  It was deliciously smooth!

Soon after other party guests arrived, it was time to order another round of drinks and some food.  For my second round and sampling another Funtini, I went with the Ocean Water, a concoction of Burnett's Blueberry Vodka, cranberry juice and a splash of Burnett's Mango Vodka.  Like the first round of drinks, it took quite awhile before they arrived to the table.  Turns out our waiter was serving double-duty, he was also the bartender.  You could tell however that he was not very experienced at bartending, having to pull out the recipe book for each and every drink he made.   Pouring one liquor into the glass, he would side step back to the recipe book, do some reading, side step back, then measure and pour in the next ingredient, side step again, repeat.  He did an admirable job, he didn't mess any drinks up (as far as we know), but his double-duty as waiter and bartender did cause a very noticeable delay.   Other members of the wait staff were again observed, standing around, chatting. 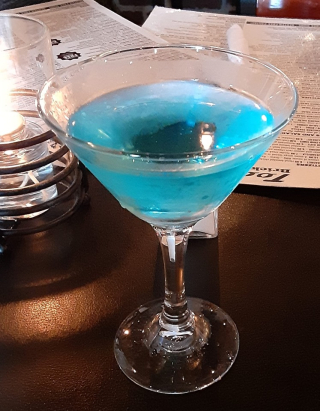 This drink needs a different name or some salt

The Ocean Water Funtini, which looks like a glass of Windex when presented, was decent enough, it gives you the fruity notes in a subtle vodka kick but here's the thing with this drink....  When I think of ocean water, I don't think of fruity notes, I think of a salt element.   The color of the drink is actually fine, it carries the blue ocean water look, but this drink needs a salt element to live up to the ocean in the name.  As for taste, this particular Funtini was not NEARLY as tasty or as smooth as the Kentucky Sunshine.

After more delay, an additional long wait for getting water for everyone (time ticking past 7:15), our waiter took our food order.  Everyone at the table selected something different, a variety of burgers, chicken dishes and sides.  Wanting to sample more Funtinis, I kept my meal order simple (and considering possible waiting time), choosing a chicken tender basket with fries.

Like the drinks, the meal order took a long time to make it to the table.  We had so much time on our on hands in fact, I started to build a martini glass pyramid with empties.....  I was about to start a third level of empty glasses when our food order finally did arrive.  It was then that another member of the staff noticed all the empty glasses and removed them from the table and sent our waiter back over to take another drink order.

The meals were quite tasty and enjoyed by all, compliments to the chef!  Every dish on the table was nicely prepared.  My chicken tenders were a 'safe' order, it's tough to screw that kind of thing up.  They were good, as in slightly above average good, crispy on the outside, juicy on the inside.  The fries were seasoned well, but the portion was quite small.  To be fair, I ordered from the appetizer section of the menu, but when my basket was set in front of me, a friend sitting across from me noted laughingly, "That's supposed to come with fries, right?" 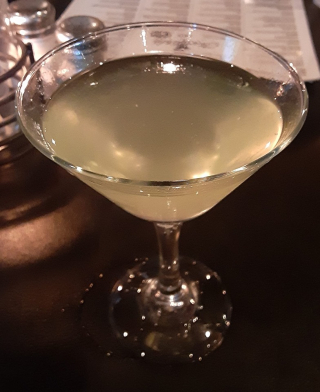 For my third Funtini, I tried the Green Apple, which is primarily Burnett's Sour Apple Vodka.  It sounded more appealing on the menu, it was rather boring though and my least favorite of the night.  I thought it would have more of a tart edge to it.

To wrap up the celebration, my birthday friend tried to order a round of drinks for everyone, but here's the response we got when trying to place the first few new Funtini orders:  "I'm sorry, we're out of the vodka needed for that drink."  They were out of vanilla flavored vodka, out of the ingredients to make a Sangra-Tini and out of another flavored vodka for another kind of Funtini, the particular name of which I cannot remember.

At that point, we all looked at each other and mutually decided, "Checks please." 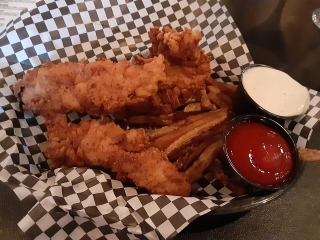 Count the fries, go ahead and no, they weren't buried under the tenders

As we waited for our checks, the guest of honor asked around the table what Funtini we each liked best.  Everybody had a clear favorite, one they would order again, but other Funtinis, not so much.  Personally, I tried three and would only order one again, the Kentucky Sunshine.   That was the general consensus of the table, of the three or so Funtinis each of us tried, everybody liked one, the other two, not so much and NOBODY at the table was willing to pay full price for them.  Half price on this night, the regular Funtini price is $7.95.  So I spent $12 on drinks on this occasion with only one of them being truly enjoyable.  On a regular night my bill for beverages would have been $24, a bit pricey for what I got.  The food was good overall, but considering the service we received, I'm not anxious to return to this spot again.  I was OK throwing down just over $20 + tip for three above average chicken tenders, a tease of fries and three drinks, but would not have been happy paying full price.  If the service were to improve and with a full stock of liquor (I suspect poor management on both counts), Todd Brians would be a repeat visit, but ONLY on half price Funtini Night.  On a regular night my bill would have topped $30 + tip and for what I got, my $30 would be better spent somewhere else. Todd Brians Brick Street Cafe & Tavern gets just 2 out of 5 Bachelor on the Cheap stars.