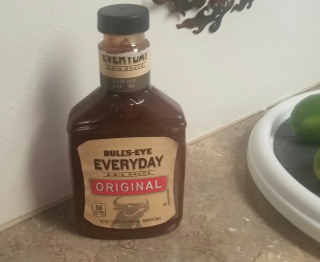 I've sampled a lot of different sauces in recent weeks, making comparisons and soon I'll be letting you know what I think the cream of the crop is. Will it be KC Masterpiece? Sweet Baby Ray's? Stubbs? Something else?

In my first tasting challenge, I sampled KC Masterpiece and Sweet Baby Ray's.  You can read that review here.

This is a Kraft Foods product with a slightly different list of ingredients than Kraft Original and it's only slightly better.  High Fructose Corn Syrup is the first ingredient listed and it is a sweet sauce in the KC BBQ style.  What separates it from Kraft Original is a higher measure of vinegar, which helps to offset the sweetness.  This used to be THE bbq sauce used by Burger King, but they dumped Bullseye in favor of Sweet Baby Rays.  That was a good move by Burger King, Sweet Baby Rays is a much better sauce.

Costing me just $1 at Dollar Tree for a 17.5 ounce bottle, it's a bargain basement price but it's also a sauce that's finishes in the lower end of the bbq sauce spectrum. Despite the extra dose of vinegar, this sauce is just too sweet and gets just 2 out of 5 Bachelor on the Cheap stars.