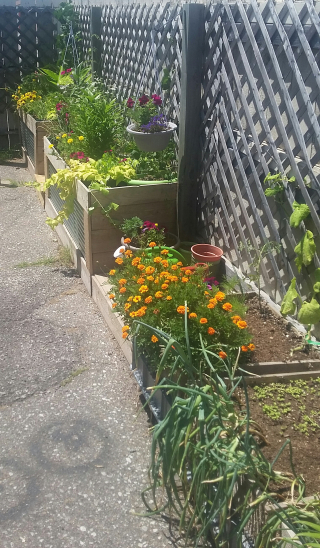 I'm one of those playing-in-the-dirt loving people. Gardening is a simple pleasure for me, from creating veggie or flower beds, to planting, to weeding, to the harvest, from start to finish it's all good. And it doesn't get any fresher than going out to the backyard, patio or balcony and picking fresh produce for dinner.

But it doesn't matter how well maintained your garden is, at some point, you'll have to deal with pests.

This is the third year for my patio garden and this season is the best it's ever performed, but today in harvesting a few green onions, I came across a couple of bugs I didn't care to see.  I've been invaded by stink bugs.

Stink bugs are sap suckers, they have a voracious appetite and will feed on just about any kind of plant.  They prefer fruit over foliage, but they're NOT picky.  They'll eat just about anything in the garden.

After squashing the two that I saw - and yes, they do stink when squashing hence the name - I began looking at the underside of leaves, focusing on cucumber plants (a garden pest favorite) and sure enough, MORE stink bugs!  Sigh, these things do like to hang out in groups....

Time to break out the insecticidal soap.  You can purchase insecticidal soap at Lowe's, Ace Hardware, Walmart, etc., but you'll be paying way too much for it, even at Walmart.  Many insecticidal soap brands also contain unwanted chemicals which if you're into organic, is a no-no and some of those commercial soaps can affect your harvest time too, pushing it back.  Here's a home made recipe, it's cheap and NOT toxic.  Most importantly, it performs just as well as the commercial stuff.  It messes with those pests, but NOT your garden! 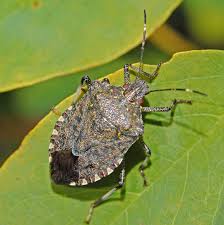 If you don't have Dawn dish soap, just make sure to use a pure soap, to mean, not dish washing detergent or any soap with bleach or perfumes in it.  Such things are harmful to the plants you'll be spraying.  The optional Hydrogen Peroxide in the recipe kind of acts like a booster and serves a dual purpose.  If there are any pest bug larvae lurking in the roots of your plants, they won't like this concoction hitting them.

This stuff works because while stink bugs have a harder shell-like back, they have a soft underside and that's where the soap does its job.  The soap penetrates that soft underside, ultimately suffocating and drying out the pest.

When spraying, be sure to turn the leaves of your plants, hitting the underside.  You should have seen all the stink bugs coming out of hiding when I started spraying!  And with that, here's the key to insecticidal soap, it only works when coming in direct contact with the pest.   Hit those bugs with the spray!

Don't buy the commercial stuff, make your own.