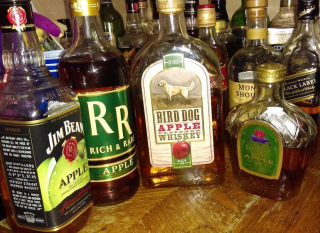 Regular readers know that I am a fan of flavored whiskey, I've always got a bottle of something in my freezer for a chilled shot or flavored specialty in the liquor cabinet to enjoy on the rocks.

Apple and whiskey is a great pairing, so good in fact, if you're not into whiskey, you will be if you try just about any apple flavored variety.

Here are the best apple whiskeys, from worst (there's really not a rotten one in the barrel) to the best.  Worst in this case, is more like a "Plan B" kind of thing when you can't find what you were looking for.  Ratings are based on price, availability, notes and the all important tasting.  All whiskeys sampled were served up in a straight shot and on the rocks.

Crown Royal Regal Apple:   This was my least favorite, a.k.a. 'worst' apple flavored whiskey I've sampled.  You definitely get the apple right off the bat in the nose. The swirl and swallow is smooth but almost bordering on being apple forward.  You do get some nice undertones of cinnamon and oak. But the most important thing in what you want in a good flavored whiskey, getting the base whiskey in the finish.  It's there.  Costing around $20 for a 750ml bottle, the price is on the high end of the apple whiskeys, it's Crown after all....  But given the rank of this whiskey, you are paying an extra $4 or $5 bucks just for a name, oh, and a bag.

Piehole Whiskey Apple Pie:  It's not just apple flavored, but apple pie flavored, yes, really. When buying it I feared it might be overly sweet, but it's not. It's got the fruity apple note you expect, but bonus - Piehole kicks things up a notch with a very nicely balanced element of a baked pie, an image of a fresh out-of-the oven pie crust dusted with that touch of cinnamon dances in your head when throwing back a shot of this stuff. This is a very nice flavored whiskey with a smooth, warm finish. No chaser needed, best as a chilled shot, awesome over vanilla ice cream.

Revel Stoke Roasted Apple:   Enjoy this whiskey on the rocks, which is the aficionado thing to do.  The roasted apple notes are in your face in a very good way.  This is a so smooth it's a dangerous kind of smooth flavored whiskey.  It will sneak up on you.

Jim Beam Apple:  You definitely get the apple sweetness in the nose, the aroma is quite noticeable as soon as the cap comes off the bottle. In the swirl and swallow the apple is pleasantly green apple tart but sweet. You also get the classic Jim Beam warm base bourbon in the finish. This whiskey is done right, with the apple complimenting the whiskey, rather than overpowering it.

Bird Dog Apple: Of note, this whiskey is 80 proof. Most other flavored whiskeys are 70 proof, so this has a little more 'kick' to it. Bird Dog pretty much delivers on all the description on the company website.  The nose is fruity apple, the color is inviting and you get all as advertised in the swirl and swallow, the cinnamon notes come through. What I like best about Bird Dog is the finish, you get the base bourbon, very enjoyable.

Yukon Jack Jacapple:  A blended whiskey with apple, spice and other natural flavors, Yukon Jack Jacapple is smoothly delicious. It's got the elements of a great cider, yet it's not too apple forward. There's that definite apple and spice nose when you swirl the glass and you also get those cider notes in the taste, but the finish and this is where Yukon Jack Jacapple is superior to other apple flavored whiskeys - It's a VERY smooooooooth and warm bourbon finish, the best of the apple whiskey barrel.  Serve as a chilled shot, on the rocks or neat.