What to do with leftover ham 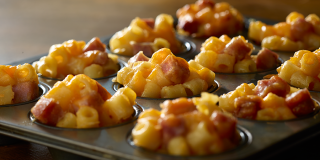 So you've got a bunch of ham leftover from the Easter dinner you made, or ham you were given to take home....  You can't just keep slicing a big thick slice of it off and eating it as is.....  Well, you can, but there's no variety in that.

What else can you do with it?

There's the obvious, make a sandwich.  Some ham, Swiss cheese, a little mustard between a couple slices of bread or in a bun....  It's another dose of YUM!

You could grab a box of scalloped potatoes from your pantry, make the potatoes per the box instructions, chunk up some of that ham, throw that in before popping those taters in the oven and boom!  Dinner.  To add a little kick, finely dice up some jalapeno pepper to include in the mix.  TASTY!

You could do a similar thing by grabbing that box of mac & cheese from the pantry and in about 10 minutes, you'll have another lunch or dinner.

Dice some ham up and put it in the fridge for later use.  You can quickly grab that diced ham for a number of dishes.....  Diced ham and scrambled eggs for breakfast; Diced ham on a salad;  Ham fried rice; Ham & beans in the crock pot; Grab some tortillas to make ham & cheese quesadillas; open up a tube of crescent rolls and bake them up with ham and green onion.

There's all kinds of things you can do with leftover ham, have fun with it!

Here's a quick recipe for the grill - Ham Kabobs.

Fire up the grill.  While the 'outdoor stove' is getting warm and ready to receive, drain the pineapple, saving the juice for a marinade.  Mix that pineapple juice, yellow mustard, clove and orange juice in a small bowl, set aside.  Put the pineapple chunks, green pepper and ham on wooden skewers (you soaked them in water for about 30 minutes, right?).   Grill for about 5-8 minutes over direct heat, basting the kabobs with the marinade and rotating frequently until cooked through.  Makes a great appetizer or side dish!